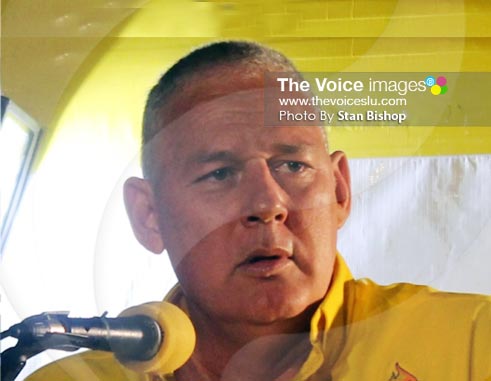 WHY is the Prime Minister travelling so much instead of sitting comfortably in his cushy chair in the Office of the Prime Minister? He is travelling because he has work to do. Parents go out to work to take care of their families and sacrifice precious family time because if they sat at home incomes would not magically fall into their lap. Simply put, it is the same logic that necessitates the Prime Minister’s visits abroad.

The hypocrisy that attends the approach of the opposition is blatant and yet it is biting them right back. Did former Dr. Kenny Anthony not travel extensively during his three terms as Prime Minister? Did he not travel to give lectures and speeches abroad, bringing back nothing more than another star to brighten his personal résumes? What did the nation benefit from the travels of the former leader of this country and lest we forget, it must be asked what did Saint Lucia gain from the record – breaking overseas ventures of former the External Affairs Minister? Again the hypocrisy is just too blatant on the part of the SLP opposition.

The level of intelligence of the opposition SLP has plunged drastically from 2011 to now. From leader to followers their political acumen is clearly depleted. This dynamic sadly gives rise to many of the non-issues and the ludicrous arguments that pass for political opposition in St Lucia since June 6.

The Saint Lucia Labour Party has an affinity for unnecessary attacks and rebuttals. Long before June 6, it was obvious that the narrative of the SLP had little positive impact. It instead makes the public cringe in disgust and underscores that the SLP opposition has gone back into their default mode, which is to oppose for opposing sake. Clearly they have not gone back to the drawing board to re-invent their game plan, since the spanking they received at the June polls. Maybe, just maybe, after their October convention a group of men worthy of being taken seriously will emerge. At the moment the struggling six are doing more harm than good to the image of the opposition

A seasoned and experienced businessman like Allen Chastanet knows that when you want something you get up and go for it, because there is competition in this world. Proactiveness is the best approach. Why should Mr.Chastanet act as if his diplomatic passport has been revoked? The Prime Minister is free to travel based on his good judgement. The SLP knows very well that bi-lateral partnerships, monetary assistance and foreign direct investment will not supernaturally come to Saint Lucia. They know that countries have their budget- deadlines for the provision of external assistance to other countries. They know that if the more developed, wealthier nations do not need anything from Saint Lucia they will not come seeking us out, we will have to go to them in our own best interest. Yet the SLP thrives on hypocrisy? Why oh why?

When Dr. Kenny Anthony resumed office in 2011 he was very quickly on a plane to Venezuela. If memory serves, he was off to Venezuela so fast that the local populace left behind, were wondering if that was where he would source the 100 million dollars he promised to pump into the local economy would come from. His trips to Cuba were notoriously frequent. SLP minions should recall how silent they were back then.

In late May of 2013 Kenny Anthony committed what many Caribbean observers consider to be the cardinal sin of diplomacy of any Prime Minister in local history. He, decided to absent himself from a meeting and working lunch for CARICOM leaders with United States Vice President Biden while he headed out to Cuba to receive a Jose Marti medal of honour. Yes, a Jose Marti medal of honour and placing a wreath at the base of the monument honouring Cuba’s national hero came before a high- level direct meeting with the Vice President of the great United States that is so heavily invested in the Caribbean.

Don’t get us wrong here, this is not an issue with Cuba’s unwavering support and the good they have done for Saint Lucia. The concern lies with poor prioritization and poor judgement on the part of the former Prime Minister who clearly did not realize that national heroes are always memorialized, most often on an annual basis. Wreaths are laid at monuments every year but CARICOM meetings with the Vice President of the US Joe Biden don’t come by that often.

A news report on that infamous trip reads: “The Prime Minister and his delegation ended the evening by attending an official dinner held in honour of Dr. Anthony at the Cubanacan Protocol Room”. Was this not a classic case of placing self ahead of the business of the country and poor judgment where placed his personal ambitions and purpose for travel before country? All the while his red minions who have now successfully found their voices looked on uncaringly as he committed egregious error after egregious error.

The fact that he sent past deputy Prime Minister Philip J. Pierre to represent him in Trinidad did not soothe the bad taste that his absence had created in the mouth of the US. What did the pundits of the Saint Lucia Labour Party say by way of alarm and reprimand of their leader’s poor judgement if not outright snub of the US’ invitation? Not a word. They were as silent as the dead.

While CARICOM Prime Ministers discussed regional efforts to promote economic growth, trade, citizen security, drug trafficking, the Caribbean Basin Initiative and energy issues with Mr. Biden, Anthony, perhaps the most articulate CARICOM Prime Minister at the time was nowhere to be found. Now tell the nation Labourites, why point a finger at Chastanet’s travels with that sack of thing hanging down your necks?

One would think that by now this little gem of a rock called Saint Lucia would be underpopulated since June 7, having experienced some kind of mass exodus on the part of SLP members and supporters particularly SLAPS who are so afraid of Chastanet ‘s leadership and who are so concerned that he is travelling too much. Please give the citizenry some substance when you speak or if you cannot provide substance, do remember that silence is golden.