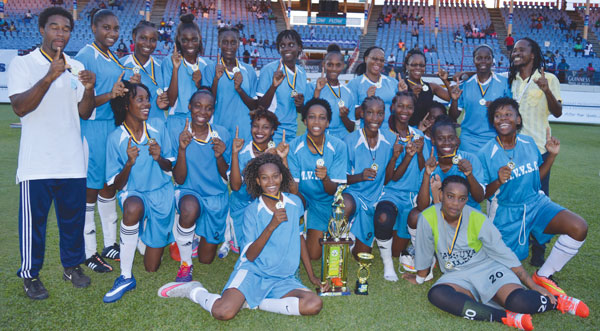 JUST when the fans thought women’s football could not get any better, Team Mabouya Valley proved them wrong as they came out on top in the St. Lucia Football Association Under – 21 Women’s final played Sunday afternoon at the Daren Sammy Cricket Ground.

For those watching the intense match-up in the stands after the scores were locked at nil all at the end of the first half, it may have been team captain Sylvie Willie of Mabouya Valley who deserved a little extra time in the spotlight. After all, she scored the winning goal in the 77th minute of play against Vieux Fort North to win the championship.

Assistant coach and physiotherapist for the Mabouya Valley team, Melch Louis spoke to the VOICE following his team’s victory.

“In the preliminary round, Mabouya Valley defeated Vieux Fort North 4 – 0 and the way they played obviously meant they went back to the drawing board and came with a new strategy. However, through hard work and dedication, we were able to withstand the pressure and came through with the victory 1 – 0,” Louis said.

VOICE: The scores were locked at nil all at the half time whistle. What was going through your mind at the time?

Melch Louis: Actually, I was a bit upset with my players for failing to keep with the strategy that was prepared for them after a series of classroom work and pep talk before we came to the finals. I have no idea what went through her minds. At the beginning of the game they played a bit intimidated; however, I was able to get them to relax a little and try get them to refocus on the game. Along with the rest of the coaching staff, we did a great job at it. This is just the beginning of things to come, because the intent is to promote female football, not just nationally, but regionally. We would like to see more female teams get involved and more individuals take up the mantle and leading them through.

The VOICE: You scored one goal but there could have been many more right?

Melch Louis: Much more. Actually, within the first fifteen minutes of the game, we had already thrown away eight goals. It was very disappointing because my intent was to double what they got the last time we played them, and had they stuck to their strategy, we would have achieved it.

For the third place silverware, Soufriere won over Vieux Fort South 4 – 0 with a hat trick scored by captain Sasha Prospere. Despite a flare up by some players mid-way into the second half of the encounter, it resulted in one player from Soufriere and Vieux Fort South being shown red cards for unsportsmanlike behaviour, while another player from Soufriere received a yellow card for getting involved in the fracas.

The scores were tied nil all at the half. On the resumption of play Prospere went on as she went on to net the fastest hat trick in her career with goals in the 42nd, 46th and 48th minute respectively to the delight of her team-mates and a handful of supporters from the western town. Jeanelle Mathurin added another to put Soufriere ahead 4 – 0 up until the final whistle.