WHEN Winston Churchill described Russia as “a riddle wrapped in a mystery inside of an enigma”, he could easily have been referring to LIAT. For decades, the operations of the regional carrier have been marked by a lack of financial transparency, disguised incompetence and futuristic uncertainty, not to mention the conflicting interests among its government shareholders.

For passengers, the skies are terribly unfriendly in a region where flying is perhaps the only realistic option, except for one problem: You can’t get there from here without plenty of headaches. LIAT has taken wastage and inefficiency to new heights – now making it public enemy number one, having taken over from commercial banks.

Hardly a day goes by without some passenger or politician berating the airline for its general inefficiency, its callous disregard for passengers, and its greed in gouging business travellers with steep fares. Someone has even suggested that Caribbean writers start writing novels that incorporate the horrors of intra-regional air travel in the plot.

There is no point in making any more excuses in defence of LIAT. The airline’s inefficiency in the form of delays and poor service has become the norm, with little recourse for the flying public. Yet this is what happens when governments have too much control over markets and industries.

The litany of complaints against LIAT was best encapsulated in a commentary by U.S. aviator and consultant Captain James Lynch: “LIAT is in a MESS, and – whether the shareholders like it or not – it has been in a mess for more than four decades, and at huge taxpayer expense. What is the solution? It is not political, that’s for sure. And it is not any of the wild solutions found in “Letters to the Editor” or social media, either. LIAT is a highly technical resource which REQUIRES licensed and experienced professionals to run it, not just any random or politically-connected person who is willing to “see what they can do” or who can beg someone to “try a thing”. FACT: The only saviour of LIAT can be the shareholders themselves. In my experience the prime ministers listen to nobody, and I cannot believe their ‘advisors’ are suggesting these courses of action.”

By now it’s well known that when it comes to air travel, Caribbean people are the most tolerant and forgiving on the planet. The list of indignities that they have suffered at the hands of a seemingly uncaring and unprofessional airline is a gut-wrenching portrait of commercial impropriety: low standards, inert supervision, poor customer service, impertinent staff, unreliable service, etc.

Almost weekly, the airline is criticised for numerous flight disruptions and cancellations, leaving hundreds stranded across the region. Most alarmingly, LIAT never seems to miss an opportunity to miss an opportunity – whether in terms of bringing on new competent leadership, restructuring to a more efficient operation or going with progressive trends in the industry.

LIAT officials have recently said that the airline is operating under “major constraints” to service Caribbean countries in its network. But really? After so much public financial investment in a regional industry fiercely regulated and free of competition? How can regional integration ever lead to economic and commercial prosperity for Caribbean nationals when a breathtakingly badly-managed regional airline continues to be protected like a sacred cow? Furthermore, intra-regional travel is used as a cash-cow, against all conventional thinking. What does it take to convince Caribbean policymakers that the exorbitant rate of tax imposed on aviation in the region is counterproductive, if we are really serious about facilitating the free movement of people in the region?

The role of regional governments in LIAT’s management has made it virtually unviable, and the shameless micromanagement of its operations all point to the need for privatization – by which I mean a profit-oriented airline ran by investors outside the Caribbean. 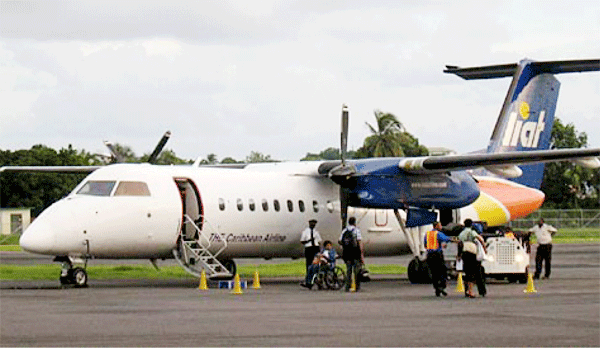 LIAT seems to change leadership reasonably often, but somehow it can’t seem to get its act together in the 21st century. But how can it, when so many countries are involved in its management? Such interference has most likely caused the airline to under-perform and further accumulate debts which are later serviced through the public purse. If the motive is to make LIAT an economic value to the region in its current form, then the best thing is to avoid state control and instead guide the management to run the airline efficiently. Some of the headwinds currently facing the airline can be lifted if regional governments put on their business-thinking caps.

It is time shareholder governments take their hands off the carrier and allowed it to operate on a strictly commercial basis. Besides, if the public has a vested interest in the airline, shouldn’t it be open to more scrutiny and accountability. When was the last time LIAT published annual accounts for the taxpaying public to see? The public owns, pays for and uses LIAT’s services and therefore these are powerful reasons why the airline must be accountable to the people.

As a Barbadian commentator has observed, “It is a puzzling paradox that an industry which has done so much to foster globalisation has itself been stuck in a regulated environment with a purely national ownership structure and protectionist rules.”
St. Vincent and the Grenadines Prime Minister Dr. Ralph Gonsalves has blamed current inefficiencies plaguing LIAT on the airline’s failure to implement a decision to shift its base from Antigua and Barbuda. The idea that the location of LIAT’s HQ is the problem is simply ridiculous. Isn’t that the same prime minister who said that “LIAT must be run at a loss because it is a social service”? P.M. Gonsalves has also recently criticised the airline for a number of cancelled flights to St. Vincent, and has said that “LIAT needs to do better”. Really, P.M. Gonsalves? Is that all the airline needs to do? It more sounds like a revolution that the airline needs to undergo. Besides, why does PM Gonsalves criticize LIAT only when the interest of his country is at stake?

Do we really know the full extent to which LIAT’s inefficiencies in affecting Caribbean tourism – estimated to contribute over US$4 billion to the CARICOM economy and to provide 280,000 jobs? Why is an airline so essential to the region’s tourism industry being run into the ground by incompetent management? That’s really a mystery!