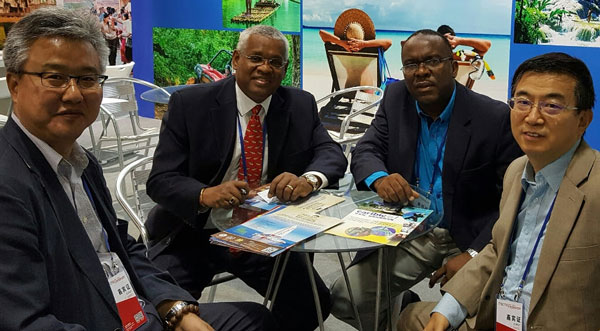 The Jamaica-based tour and destination management company Island Routes, is attending the expo alongside the Jamaica Tourist Board (JTB) and the Caribic Group of Companies. During the event the trio met with Zhang Hui, Co-Chief Executive Officer and Director of China National Travel Service Group Corporation. The group is a result of a recent merger between CTS International and CITS Holdings; the newly merged company became China’s and the World’s largest travel group. During the meeting David Shields, Island Routes’ vice president of sales and Mr Zhang discussed ways in which Island Routes and the China National Travel Service Group can work together to better facilitate Chinese outbound travel to the Caribbean region.

David Shields commented: “There is a huge amount of potential in the Chinese outbound travel market. In 2015, over 120 million Chinese citizens travelled overseas, spending more than US$195 billion. The expo has been extremely productive and we now look forward to continuing to build on our relationships with key players in China and to promoting the Caribbean to the Chinese market.”

Dr Wu who facilitated the delegation from Jamaica and a number of other destinations attending the SCITE commented: “it is time for Jamaica to reap the benefits of the concerted promotional efforts of the JTB and private sector companies such as Islands Routes that were instrumental in taking Jamaica to China. As a result, the Chinese are definitely coming to Jamaica and the Caribbean in greater numbers. More and more, Chinese tour operators and actual travelers wish to visit much further destinations such as Jamaica which removed the visa requirement for Chinese nationals.” Dr Wu is the Chief Executive Officer of China Business Network (CBN) which is the China Representative of the Jamaica Tourist Board.

Following the travel expo David Shields joined The Honourable Edmund Bartlett, CD, MP, Jamaica’s Minister of Tourism and Paul Pennicook, Jamaica’s Director of Tourism at the World Routes and World Tourism Summit in Chengdu, the capital of the Sichuan Province. Sichuan has a population of 87 million and more Fortune 500 companies operating in and around Chengdu than anywhere else in China. Chengdu is also a major outbound gateway for Chinese living in the south-western parts of China.