I Will Return You A man 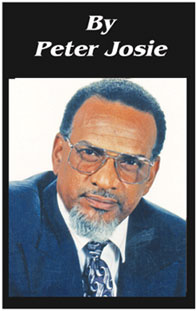 THERE are several versions of: ‘Give me a child until he is seven and I will give you the man.’
The original has been attributed to Aristotle and at least two notable others – the Jesuits, and one Richard Dawkins, a self-proclaimed atheist. The Jesuit’s version promised to return a man (of honour), a citizen (of integrity) and a Catholic. Dawkins promised no such qualities in the finished product – other than a man! I contemplated the above whilst reviewing a surprise visit Prime Minister Chastanet paid to the Ciceron Combined School last week. The press had failed to report a lasting message.

There was little that would have persuaded one to argue that a surprise visit by a towering new leader to bright young faces on their return to school may have missed its mark. Children are always excited to forgo a formal agenda to welcome an interesting guest into the classroom. The message seemed to have been, ‘I am back home and I have chosen to visit this school giving kids priority over an address to the nation, at this time.’

It has become accepted wisdom that youth is the future of a nation. This has been amended in the west to include, ‘to communicate with Muslim kids at an early age in an effort to curb the growth of anger and mistrust’- against the west. Early socialization and education has been a proving ground for strong upright citizens from time immemorial. What one finds amazing is that such an approach is spoken of today as if it was recent vintage.

The idea of training-up a child when he/she is young and helping it grow-up with desirable habits is as old as the hills. Indeed, it’s been proven that strong discipline and useful morals are most likely to succeed in transforming a seven year old into a law abiding and exemplary citizen. The crux of the matter is to encourage kids from an early age to view society as a continuing project in which they are later to participate meaningfully, adding their own positive contribution for the benefit of the many.

It is from such early training and understanding that the impact of the following saying draws its strength: ‘Sow a thought, reap an act; sow an act, reap a habit; sow a habit, reap a character; sow a character, reap a destiny.’

Given the general deterioration and the squalid appearance of Castries and elsewhere after a heavy downpour, coupled with creeping lawlessness which threatens the island, the government must give serious consideration to continuing such visits to schools to sensitize the young ones to a broader community responsibility. It must however make it clear to its public relations people what message it intends to leave, as a mark of its visit.

Three examples come to mind. The formation of girl guides and scouts in primary schools and a cadet corps in every secondary school on the island are desirable marks. The idea is not new. I was reminded of the usefulness of the cadets when a certain police officer revealed to a mutual friend that it was the cadets and not the police force, that taught him to polish his shoes and have his uniforms spick and span for daily use as well as parades and special occasions. I can vouch for such training and its lasting effects on a young cadet.

There is an urgent and necessary need to use such tried and tested institutions as scouts and girl guides to point youth in the correct direction. As they begin to master the discipline of marching in time, to the commands of their leader the lesson of unity, of singular purpose, sinks in. Soon each Boy Scout or Girl Guide, or cadet becomes invested in team-work, pride and discipline.

The second touch of value which a visit to a school by a Prime Minister or other Minister of the Government may add to make the visit memorable is the gift of a permanent replica of the school crest and motto. This should be placed in a prominent position on the outer wall of the school. These should be standard in size. The visiting official may add an inscription such as: ‘Be happy with what you have while studying (working),for what you want.’ Or this: ‘The one who knows how to adjust is the one who knows how to survive.’ ‘Forget yesterday’s mistakes, use today to keep striving for better.’ is a third example.

Then for good measure one may add the naming of a patron for a particular school. Such a patron ought to be an early student of that particular school; one who returned to help the community and who worked diligently at his trade and volunteers his/her time to teach others. High achievement in sports and/or academics which bring pride to the community and the school could be a consideration.

Of course the country’s national flag should be prominently displayed on suitable flag poles near or at the entrance of every school.

The above idea has one aim and one aim only in mind. It is for a school to take a child and return it to its parents (and its community) a citizen of integrity, a person of honour and a law abiding citizen. That should be the touchstone upon which a solid social and economic structure is built. It is an idea which a Government that is properly focused and knows what it is doing will be well advised to heed.

Finally, when a child is hurt and abused in any way it should immediately become the job of the Minister of Justice and the Police to see that that child gets justice and is removed from the abusive environment and protected. The child from Ciceron who almost lost an eye two weeks ago deserves government and police intervention, soonest.