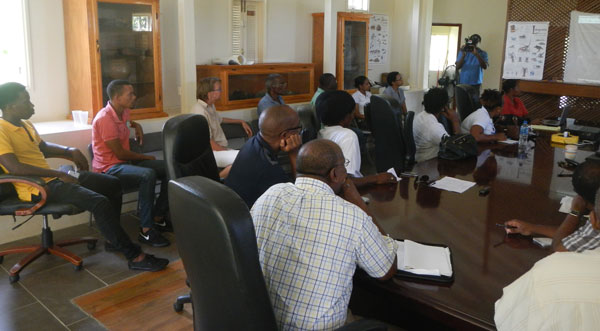 Public’s views to be Sent to Authorities And Investors

THE Saint Lucia National Trust (SLNT) wrapped up two consultations with various stakeholders in an effort to ascertain information and encourage dialogue on the proposed Desert Star Holdings (DSH) Limited Pearl of the Caribbean project which has been earmarked for Vieux Fort.

The aim of the ongoing dialogues is to collate the views on this project from a wide cross section of stakeholders.

According to a Trust statement issued yesterday, there was general consensus that a project of this magnitude could result in a boost in the economy. A major issue raised at both meetings was the proposed development of a marina in the mangroves. Many were of the view that the mangroves which are designated sites under the Ramsar Convention should not be developed in any way as they are home to a large variety of fish, crab and many other marine species coupled with the fact that mangroves protect shorelines from destructive storm and hurricane winds, waves and floods.

Other concerns included whether the magnitude of the proposed 700-acre development might negatively affect the town’s water supply, waste and sewerage management, the area’s cultural assets, agriculture and availability of land for locals. The stakeholders also emphasized the need for there to be greater access to information and established and efficient mechanisms to facilitate public participation so that citizens are engaged in the decision-making process. On the other hand, others were optimistic about the development and encouraged the gathering to be open to the idea and all its possibilities.

Mr. Bishnu Tulsie, SLNT’s Director said: “As we have been saying over the years, the Trust is never opposed to development as we are aware of the need to boost the economy and provide employment. Our philosophy is that development and conservation are not mutually exclusive and as such development should always be approached in a balanced manner so that it meets the need of the people, while protecting our natural resources which are already threatened by natural disasters, climate change, over-exploitation and a myriad of other factors.”

The first meeting held on September 5 at the Auberge Seraphine, Castries was attended by participants from Invest Saint Lucia, the Development Control Authority, the Forestry and Fisheries Departments, Saint Lucia Archaeological and Historical Society as well as staff and Councillors of the SLNT among others. Participants attending the second dialogue a week ago at the Trust’s southern office located at the Maria Islands Interpretation Centre in Vieux Fort included representatives from the Southern Tourism Development Corporation, The Reef Restaurant, Aupicon Charcoal and Agricultural Producers, Seamoss Farmers and an SLNT Councillor, members and staff among others.

The Trust said the next dialogue slated for October 8 will be to engage members of the Saint Lucia National Trust. “The views collated from these dialogues will be relayed to the relevant authorities, stakeholders and investor”, the statement said.

The Convention on Wetlands, called the Ramsar Convention, is an intergovernmental treaty that provides the framework for national action and international cooperation for the conservation and wise use of wetlands and their resources.