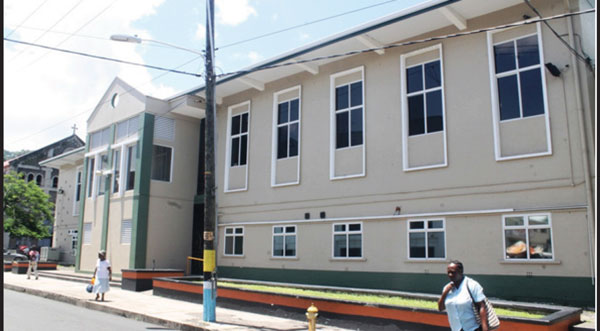 With the new law year set to open on Tuesday, the reopening of the main court building on Peynier Street in Castries remains in question.

Last October, President of the Bar Association of Saint Lucia, Mary Juliana Charles, flayed the government for not doing enough to improve the air quality at the courthouse that had caused many lawyers and staff using the building to become ill.

Rats, bats, pigeons and other animals, she said, had burrowed themselves into the building, which was built following the great Castries fire in 1948.

After the court went into recess in July last year, renovations were scheduled to begin so as to have the building habitable by the opening of the new law year in mid-September.

However, renovation works continued past the opening of the new law year, prompting Charles to tell The VOICE last October that her association “found that the so-called renovations were totally lacking”, following a tour of the building.

When the building was built, asbestos, which was not deemed injurious at the time, was used. Over the years, however, the material has been proven to cause respiratory problems and cancer.

As such, Charles said that her members would not set foot into the renovated building unless the relevant authorities furnished her association with an air quality report. During the renovations phase, truckloads of asbestos were seen being carted away from the building.

Since the closure of the building, court proceedings normally held there have been held at nearly a dozen different locations in the city, including the Nyerah Court building on John Compton Highway.

Charles told The VOICE on Thursday that while the renovations were completed “a long time ago”, she received an update from the Ministry of Home Affairs, Justice and National Security on September 6 regarding the air quality report.

“It simply informed that the air quality testing had been conducted from August 22-24 this year and samples taken from the building had been packed and forwarded to laboratories in the United States,” Charles said. (I was also told that) results will be made available two weeks later following which a report will be sent to the ministry. So I am eagerly awaiting that report from the ministry.”

Charles said that notwithstanding the air quality report not yet being made available, she was “reliably informed” that the building not being used for the opening of the new law year was due to the high volume of people coming to Saint Lucia from the nine OECS Member States to join their local counterparts for Tuesday’s special sitting.

Attorney Al C. Elliott told The VOICE this week that authorities had indicated that the courthouse would be made available by this month to coincide with the new law year. However, he said that seems unlikely.

“There was supposed to be a timeline that should have been in September,” Elliott said. “That (timeline) was thrown around but not officially. But we were told casually that we can expect to move back into the building sometime in September.”

Attorney and human rights advocate, Mary Francis, told The VOICE this week that attorneys were apprised by the Bar Association that even if the building was indeed certified for reopening, the telecommunications company needs at least one month to install the necessary infrastructure that would support the simulcast of the opening of the new law year. However, she maintains that the building should be reopened and cases heard.

The opening of the new law year will begin with a service at Maranatha Seventh-Day Adventist Church from 8:00 a.m. followed by the opening ceremony, traditionally held at the courthouse, has been moved to the National Cultural Centre (NCC) where the formal court sitting will be held.

While special sittings will take place in all nine OECS Member States simultaneously, Chief Justice Dame Janice Pereira, will preside over the ceremonial opening in Saint Lucia. Her opening address will be carried live throughout the OECS.