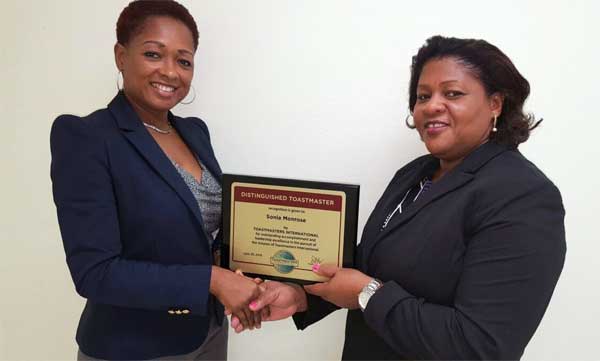 THE Public Service Toastmasters Club, at its recent annual Installation Ceremony of club officers, also recognized and celebrated with Sonia Monrose for her achievement and success on receiving the title of Distinguished Toastmaster (DTM) from Toastmasters International.

Ms.Monrose is the first member from the club to attain this status as well as the first Saint Lucian to reach this significant milestone.

The DTM title was conferred on by Toastmasters International after Monrose had met all the requirements of the communication and leadership tracks starting from the basic track through to the advanced.

The Distinguished Toastmaster award is the highest the organization bestows. The DTM recognizes a superior level of achievement in both communication and leadership. To be eligible for the award a member must have earned the Advanced Communicator Gold and the Advanced Leader Silver awards.

Monrose also completed her second stint of service to the Caribbean, District 81, having successfully completed her term for the 2015 to 2016 Toastmaster year as Division C Director. Her portfolio included supervision of Areas 14 to 20 which encompasses clubs in St Vincent and the Grenadines, Barbados, Saint Lucia, Martinique, Dominica and Guadeloupe. Her first round of service at the District level was during the period June 2014 to July 2015 when she was appointed to serve as the Area Governor (now Area Director) for Area 17 where she was responsible for clubs in Saint Lucia, Martinique and Dominica.

During both tours of duty she worked assiduously to ensure that members accomplished their goals and that her jurisdiction attained the highest award of President’s Distinguished Division and Area, having met the criteria set by Toastmasters International. She has also held several positions at the local club level.

As the Public Service Toastmasters Club celebrates its fifth Anniversary this month, it is noteworthy that Monrose achieved the DTM designation at this time as it was through her initiative that the club was instituted, after having obtained permission and support from the Ministry of the Public Service.

The Public Service Toastmasters Club is an affiliation of Toastmasters International, a world leader in communication and leadership development. Membership in the organization is more than 332,000. Members improve their speaking and leadership skills by attending one of the 15,400 clubs in 135 countries that make up our global network of meeting locations.

In the Caribbean, District 81 is made up of 167 active clubs from Turks and Caicos in the north down to Guyana in the south in English, French, Dutch and Spanish speaking countries. Membership is about 7,884.

Toastmasters’ International mantra is that the world needs leaders. Leaders head families, coach teams, run businesses and mentor others. These leaders must not only accomplish, they must communicate. By regularly giving speeches, gaining feedback, leading teams and guiding others to achieve their goals in a supportive atmosphere, leaders emerge from the Toastmasters programme.

Every Toastmaster’s journey begins with a single speech. During their journey, toastmasters learn to tell their stories. They listen and answer. They plan and lead. They give feedback and accept it. The organization also provides a wonderful opportunity to network with members all over the world.