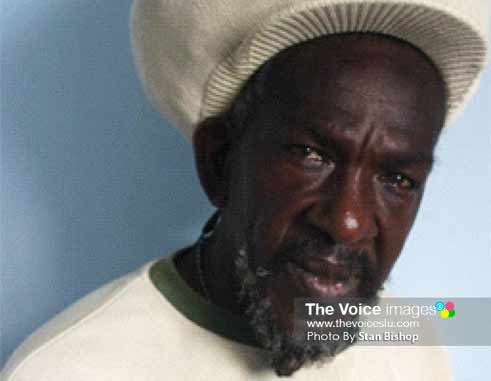 Trials of a Veteran Calypsonian.

CYRIL Felix, alias Get Through, is still working on getting over the anguish he faced as a Rastafarian in the early days of the movement. But he unequivocally professes that his love of calypso flows too steadily in his veins for him to ever part with the art form.

As Get Through tells it, calypso has been the medium that has gotten him through tough times and earned him a place in the annals of calypso. After decades in the business, he says he’s not about to prolong his long hiatus from the competitive stage longer than he should.

Get Through started singing in his early years at St. Aloysious R.C. Boys’ Primary School. At age 14, he used an audio recorder to record himself singing his first calypso extemporaneously. After playing the song back and feeling he had a musical vibe that could entertain people, he decided to take up songwriting and singing.

He adopted the name “Get Through” a few years after he converted to Rastafarianism 45 years ago. Back then, he said, “the system used to fight down Rasta”. At the time, he was more involved in singing reggae but after realizing that reggae was not creating opportunities for him, he decided to stick with calypso.

After returning from St. Croix in 1981, Get Through pursued a singing career in calypso. Inspired by the Jonestown massacre in Guyana in which hundreds of people had died a few years earlier, Get Through – again without putting pen to paper – said he came up with the lyrics to the song, “Jim Jones”, some of which went like this:

At the time, there were rehearsals under way for calypso quarterfinals. With two songs in hand – “Jim Jones” and “Carnival Influence” – Get Through refused to participate in the quarterfinals, his reason being that he preferred the event being held publicly for all to judge. As a result, he never went before the judges.

He later found out that a few other calypsonians with whom he had made a pact to boycott the calypso season had actually participated in the quarterfinal and made it all the way to the final. To get even, Get Through decided to boycott the following year’s calypso season by opening his own calypso tent.

“I told the other fellas with me that we would take over the calypso and name the tent ‘Take Over’,” Get Through, 66, told me. “I also took on the name ‘Get Through’ because I told myself that I must get through in the calypso arena.”

The following year, Get Through teamed up with fellow songwriters, Truscott “Sookoo” Augustin and Trevor “Jah T” Anthony, to manage the new tent. He literally went through the city, encouraging every calypsonian he met to join his new tent, including Sky Hawk, Observer, Brisco, Soul and Sleeping Serpent.

The band was launched in May, 1982 at the National Cultural Centre, with Sookoo doubling as doorman and master of ceremonies. However, Get Through said the $15 per ticket the new tent on the block was charging got a few rival tents, such as Uprising and Young Ambassadors, unnerved. In one instance, Get Through said, a police officer – who was also a calypsonian from another tent – was suspected of paying three men “to mash up my tent”.

The night of our opening, everything was lovely,” Get Through said. “The next night was the same. But the third night was war because since the other tents were not making money, people were paying people to disrupt my tent.”

That same year, Get Through won the Road March title with “What De People Chanting” but placed third in the Calypso Monarch. With a win and a loss in hand, the love and encouragement he got from his fans made him more determined to press on, competing every year after that until 1986, placing fourth repeatedly in the last four years of his tenure in competitive calypso.

Get Through said his departure from competitive calypso in 1986 came about after getting back his score sheets and noticing that one of the judges had scribbled the following words: “This song does not make sense.”

“That discouraged me and I stopped singing,” Get Through said. “I started managing the tent by myself. It wasn’t easy, either, because after the calypso season, I was so stressed that I would end up in the hospital. Eventually, I took a back seat in the tent and let other people run things.”

Get Through said he was the kind of tent leader who would not compete against calypsonians from his tent. Once he saw they had more potential, he said he made the sacrifice by allowing them to go through.

He was also responsible for the genesis of the R.C. Jam which started in the early 1980s, writing for youngsters whose songs won first, second and third places the first year of the competition. One of the songs also won Road March that year, he said. Principal of Leon Hess Comprehensive Secondary School, RohanLubon, once won a competition as a youngster singing one of Get Through’s songs.

Many people – if not most – know Get Through for his 2001 anthem, “Marchand Posse”, which still serves as inspiration for the Castries suburb that often carries the stigmas of poverty and crime. The song was the catalyst that brought Get Through back onto the competitive calypso stage. It was hard for Get Through not to compete, especially with lyrics like:

“Marchand is a place where Lucians really
Come together in unity
Marchand, if you pleeeeease,
Is de capital of Castries…”

Following a tragic incident one evening in Marchand in April, 1999 in which Canadian tourist, 23-year-old Thomas James Nugent, was stabbed to death, Get Through felt he had to remind people that many positives do come from Marchand, including being the longtime home of the island’s first Chief Minister, Sir George F.L. Charles.

“At that time, many people were bad-talking Marchand,” Get Through said. “Being from Marchand, I decided I had to do something. So I reasoned with Sookoo and told him we had to put something together. I gave him the skeleton for the idea and he finished it.”

However, Get Through said domestic problems got the better of him on stage during the semifinal round and he failed to finish his performance under the weight of his heavy burdens. Again, he left the competitive calypso arena.

Get Through said he has written over 100 calypsos, with some music sheets being so old that cockroaches now have a field day with them. He continues to mentor calypsonians, he said, and gives them a few ideas about songwriting whenever he can.

He said he’s more like the Mutabaruka of calypso, a man who desperately strives to put the soul into the language of the art form. He said he believes in good, clean lyrics and would not promote smut in his lyrics.

“I sing the kind of calypsos that when I’m really old I can sit down with my grandchildren and great grandchildren and listen to without any fear. I don’t sing seasonal sings; I sing songs that last,” Get Through.

With respect to the growth of calypso, Get Through said the art form is not growing as it should. He cited the trends for semifinals and finals over the years, saying “the same set of people keep going through”.

“That’s very bad and it kills the art form,” Get Through lamented. “We’ve had young people who, despite not making it to the finals, were discouraged by some people. So I’m happy to see that youths like Mighty Sizzler and Lil Nick are preparing themselves to be the new guard.”

This year, Get Through thought of making a comeback to competitive calypso but decided against it eventually. During our interview, he sang a few bars reminiscent of the nostalgic, vintage days of calypso when he first entered the fray. Despite sitting out another season, he affirms that he’s not totally out of the game.

“Calypso is not dead and will never die. Calypso is a tool that we use to speak on behalf of the people. So I’ll be back soon,” Get Through said.