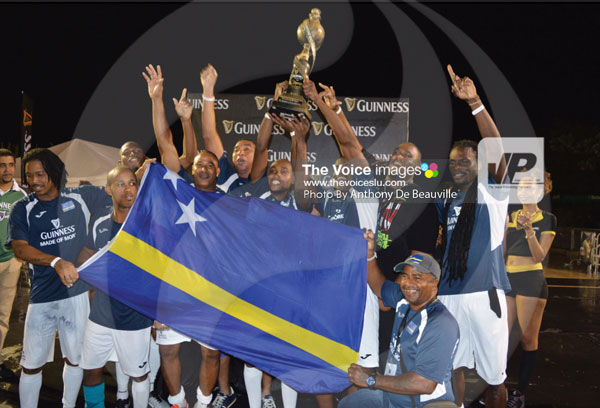 FANTASTIC of Soufriere turned out to be less than that when they failed to make the last eight of the Guinness Street Football Challenge here on Sunday.

The boys from Soufriere performed poorly in the preliminary rounds and could not match the results of previous teams from the town which had made the finals on two previous occasions.

Instead, it was Respect Boys from Curacao who were crowned champions of the 2016 Challenge after defeating Junior Mafia from Trinidad and Tobago 1 – 0 in the final late in the evening to secure an undisclosed cash prize and an all expenses paid trip to Rio de Janerio, Brazil.

The final was played in front of a crowd of just about 100 spectators who had stayed on to the end on the Ramp in Rodney Bay after torrential rains accompanied by strong gusty winds had earlier forced the massive crowd to disperse.

The Curacao based team comprising a number of Futsal players had qualified for the finals with victories over Barbados (2 – 1 in a penalty shootout after the score was 1 – 1 at regulation time) ; then defeated Guyana 2 – 1 in the semifinal. Midway into the first half a Guyanese player was issued with a yellow card for unsportsmanlike behaviour, but had to stay off court for three minutes before returning into action.

In the final Respect Boys had to overcome a stubborn effort from Junior Mafia to win 1 – 0, the goal coming early in the first half.

The second place team, Junior Mafia defeated Antigua and Barbuda 2 – 1 in a penalty shootout in the quarter final after the scores were locked 0 – 0 after regulation time. In the semifinal Junior Mafia had the better of Jamaica 1 – 0.

In the third place playoff Sparta Boss out of Guyana salvaged some pride when they defeated Medley Mixers out of Jamaica 1 – 0 a goal scored in the first half. Heading into the quarterfinal stage the Guyanese defeated Pyola out of St. Vincent and the Grenadines 3 – 1, halftime score 2 – 0.; while the Jamaicans squeezed past God Give God Takes out of Dominica 2 – 1 in a penalty shootout.