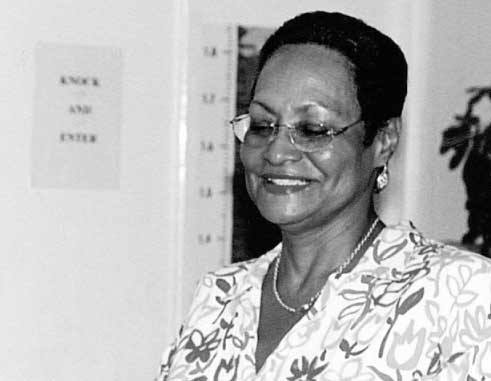 By Her Daughters, Jeannine Giraudy and Mara Thompson

CICELY Monica Giraudy, nee Beaubrun, was born on April 17,1934 in Grenada, the sixth of seven children, to a St. Lucian father, Ignatius Cecil “Sauce” Beaubrun, the then Administrator of the Windward Islands, and Grenadian mother and housewife,ClytieBeaubrun. The family lived in Grenada, Trinidad and Barbados, until they finally settled in Saint Lucia.

Monica graduated from St Joseph’s Convent and left for England in 1953 to study nursing. She often talked about her personal and academic growth in England and the enjoyable years there with her friend Judy. She spent two years in Paris as an English speaking tour guide before returning to Saint Lucia.

Choosing not to practice nursing, Monica found herself at a crossroad. She considered returning to England to study hairdressing but family and friends thought it was a ridiculous idea and tried to dissuade her. In her own words:“It was then that I decided to do it my way.” So she headed back to England and studied hairdressing.

Upon herreturn, Monica started the first grand, modern hairdressing salon accessible to Saint Lucians of all walks of life, and the trade suited her. She was beautiful, vivacious, regal, classy, with a superb head of hair and very sociable. But beneath all this lurked a formidable business woman with the strength and energy of an ox.

She turned this simple trade into a financially successful business. Soon, she owned one salon on MicoudStreet in Castries and one in every major hotel from Gros Islet to Vieux Fort, employing up to 12 hairdressers including Denis, Sharman, Norma, Emily, Daisy, Christine, Francis, Juliana,Margaret-Ann, Sharon, Sandra… and many of our friends like Liz, Cheryl, Linda, Eva, Bev.

Monica also had her own weekly radio call-in programme: “Your Hair in Our Care”, promoting healthy hair and modern forms of hair grooming. She provided a loan scheme for hairdressers to be trained in England and be hired on return to St. Lucia. She became the main importer of hairdressing products into Saint, Lucia.

Moreover, she tackled all areas of the beauty business. Carnival Queen and Ms World contestants were groomed and styled by her and her dear friend Wendy Bain, now deceased, and year after year she won the best hairdresser award.

As her children, we were fully interwoven into all her businesses, voluntarily or otherwise. I remember going to the Geest Banana Shed for each carnival queen competition. Barely seven years old, I washanding her hair clips and hairspray at 1:00 in the morning, backstage, at the Banana Shed. Her businesses kept growing: soonthere were exercise machines for ladies, beauty supply shops, a mini mart, a jewelery outlet, and a hairdressing school where she trained the hairdressers of today.

It seemed every few months she woke with a new idea and acted promptly on it. It was the period of Woodstock and Flower Power so another idea was born. I remember I came home from school and she said, “Jeannine after you’ve completed your homework we are going to make bands.” She set out leather, pincers, string, beads and islets and together we made arm bands, neck bands, wrist bands, peace and love jewelery and patches. And they sold like hot cakes.

One might figure that our social consciousness came from our politician Dad. And, indeed, our father’s politics caused us to view Saint Lucia as a whole and not just through the prism of our immediate circle. But our Mother, having lived in several islands by the time she was 15 years old continued the tradition established for each generation before us: during school vacations we were sent to Grenada and to Martinique pour apprendre le fancais et passer les vacances avec nostres bons amis, les St.Cyr.

These experiences broadened our meaning of “national”, eventuallyempowering Mara to believe that she could actually run for elections as a SaintLucian in Barbados. Our Mother’s attitude was always “St Lucia is not too small nor is the world too large”.

Apart from her business endeavours Monica was focussed on improving the lives of others. She would say I have to help “John” because he has a good brain, or “because he is a good soul”. She would send entire families to school; books and uniforms completely paid for. At other times, she was job hunting for Mary because “I know she is capable”, or guaranteeing a loan for “Peter” to buy land, or to start a small business. She met the tuition fees for several young girls to the Care Programme and many a young man tohospitality school.

Fluent in French, she became a member of Alliance Francaise, and later served as President.

She was an active member of the Arthritis and Lupus Association, helping to raise funds, and hosting their monthly meetings at her home.

Every Monday she hosted the Monday Club, a discussion group of informed ladies. Apart from reviewing best sellers, they entertained guest speakers on the environment, the administration of justice, alternative medicine, reforestation, drug abuse, a wide variety of topics that would be the envy of any institution of higher learning. And, where possible, action was taken by the group to find solutions to the problems discussed.

Only yesterday, for the first time, an award in her name was granted to a bright well rounded student at the Gros-Islet primary school. The Monica Giraudy Award.

Our mother was good, loving, tough and practical and believed in high standards. But, most of all, she was fearless. I remember the political instability in1979 when the city of Castries was being looted. Against the advice of the police, our Mother remained in her property on the square, and when the looters scaled the wall and fell at her door step, she fearlessly defended her property, with a metal tail comb.

Monica and Aunty Sheila ensured that all children were promptly baptized and raised in the Church. Before she became bedridden, she attended Mass regularly, with all seven grandchildren in tow. When her grandchildren were not in Saint Lucia she attended mass at the Monastery and St Joseph, the Worker Church in Gros Islet, with her dear friend Sybil Cozier.

But her grand children were her ultimate pride and joy and her arms were open to them all. Both Jeannine and I have lived outside Saint Lucia, but we were determined that our children would know Saint Lucia almost as well as we did. So every single summer and many Christmases were spent in Saint Lucia. So Grandma’s house was the focal point of all grandchildren and the hub of all others including the extended circle of Linda’s children, Eva’s children, Cheryl’s children, Thea’s children and Marie-Jeanne’s children.

Today, Shayla is a paid part-time actress in Trinidad because of the plays she learned to write, produce and perform at Grandma’s house, under Grandma’s supervision. Misha is a part-time model because Grandma saw her potential. In her eyes, Damian was creativity and brawn in one package, and for the last two years when she could barely walk, she depended on him to pick her up and carry her to all appointments, or just to sit on her own porch. Oya’s interest in the Young Democrats of the Democratic LabourParty of Barbados was encouraged by her Grandmother. John Michael’s national awards for writing were treasures to her, and she always said Osa, the baby of the grand children, not only resembled her, but was of a similar nature, smart, confident and independent.

And so in the most curious of ways our Mother made her contribution. Vraiment, she was our “Grande Dame”. In these last few months, acknowledging that the quality of her life had seriously deteriorated, she would say she is tired, she is ready to go, ready to see her Maker. Now, her journey is done, and we are grateful that by the grace of God, she was able to live life her way. May she rest in peace.