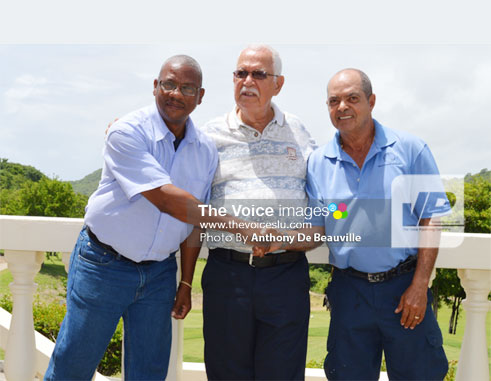 IN the run up to Saint Lucia’s hosting of the third Test match between the touring India team and host West Indies scheduled for the Darren Sammy National Cricket Ground in Beausejour August 9 – 13, St. Lucia Tourist Board has again partnered with Sports Consultant and veteran cricket commentator, Joseph “Reds” Perreira.

This time around the emphasis is to attract some of the visiting legends of cricket to the inaugural Prime Minister’s One Day Charity Golf tournament at the lush green Cap Estate 18 hole Golf Course.

The event which is in collaboration with the St. Lucia Golf Association and the St.Lucia National Cricket Association will see Perreira spearheading the promotional and sensitization campaign that will target not only on-island spectators, but critically visitors coming for the Test match as well.

At a recently held press conference at the Cap Estate Golf Club, SLNCA Operations Manager Brian Calixte said, his Association was pleased to team up with the Golf Association for this charity tournament. In 2012 the SLNCA was involved in a similar venture where they had a number of celebrities participated in the tournament and the proceeds went a long way in assisting both associations. This year, we hoped the same would happen with the proceeds going towards assisting the two associations with their respective programmes.

Calixte continued: “As you are aware, the SLNCA has a number of youth programmes including the Kiddy Cricket and Grassroots programmes and one of the things we want to introduce this year is the community-based programme islandwide. Despite the fact we have these two programmes currently being held within six districts, we have 16 affiliates so we have another ten districts without a programme, If this year’s charity golf tournament is a success it will assist the SLNCA in that area. Another area we will be looking at closely is women’s cricket. Over the past weeks you would have heard a lot about women’s cricket. Finance is always a problem so we are hoping with the success of the golf even we will be able to divert some funding into women cricket”

Melton McKenzie, 1st vice president of the St.Lucia Golf Association said at least 60 local players will take part in this tournament Two professional golfers would like to be part of this venture as well, he said.

In terms of the youth players, McKenzie said, “A number of young junior golfers from age 10 to 16 years will be participating in the tournament. That is what we need to get going, for the golf programme to be sent out to the schools. That’s our main contention at this point. And this is one of the reasons for this particular charity to raise sufficient funds to fund the young cricketers and prospective upcoming young golfers that are locked away in the schools. We are going to bring golf to every school in St. Lucia, that is the plan”.

He added: “Our target is approximately EC$150,000.00 for this event. We hope we are able to get it with the kind-heart sand deep pockets of our sponsors to come. That’s our head target for this. From there on we will work along with the Ministry of Youth Development and Sports and they have indicated full interest in backing the programmme, one hundred percent. So this is like a forerunner for bigger things to come for our junior cricketers and golfers on the island”.

Perreira said, he has started reaching out to players, the likes of former West Indies wicketkeeper / batsman Jeffrey Dujon has already been contacted. He added: “We have learned that both the ICC umpires coming are golfers; they have already been invited. Calls have been made to Brian Lara, Ezra Mosely, Desmond Haynes and Gordon Greenidge. A number of people have already received the information, but they are to let us know about their availability. One of the things about some of the players, some of the coaches, some of the personalities is that the CPL final is on the same day as this cricket / golf fundraiser under the banner of the Prime Minister of St. Lucia.

Perreira said: “Brain Lara is looking at his August schedule and if anything, he came the last time we had the golf day. But it’s early days yet and the personalities will not commit so early. But we are fairly sure that all the television people are coming for the Test match. We are contacting the Television personalities hoping when they come for CPL they can help us to spread the word. We are fairly optimistic that we will have a good bunch of overseas personalities coming to support”.