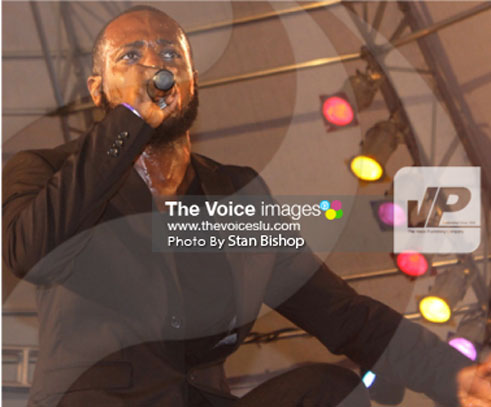 SEDALE Simei is way past the status of rising star. In fact, whenever he hits the stage to perform, the hype and talent he brings makes him seem more like an entire constellation. With consistent high-octane performances that most of his audiences cannot seem to get enough of, Sedale’s contribution to soca music is truly deeper than most people might ever imagine.

Sedale, whose hit, “Pandemonium”, still causes a stir two years after its release, recently teamed up with Piton Beer, becoming the Saint Lucia Carnival gold sponsor’s first-ever celebrity brand ambassador. It seemed a perfect fit that the island’s award-winning beer would collaborate with an artiste that many people believe is also worth his fair share in gold. The company affirms that quality and taste at their best are traits shared by Sedale and their brew.

“Sedale has proven himself to be a formidable artiste with a deeply-rooted love for not just his music but for his country,” the beer company noted in choosing the artiste.

Sedale first caused much pandemonium with his breakout hit in 2014 both here and abroad. Teaming up with his friend, Wildfire, on the hit track proved to be the sort of chemistry that music was made for.

While the forgone conclusion that year was that “Pandemonium” would capture the Groovy Soca title, the judges felt the number of beats per minute qualified it instead for the Party Soca component of the competition. Sedale was crestfallen momentarily.

But neither Sedale nor “Pandemonium” were out yet. The track went on to capture the People’s Monarch title and the people’s hearts. Riding on that high momentum, Sedale, a member of the ‘Deeper Than Soca’ camp, returned last year with a slew of tracks that still send fans into a frenzy. With tracks like “Neighbour” and the up-tempo “Lawless”, Sedale’s popularity continued to grow and promoters kept him on speed-dial.

“Neighbour” actually earned him second place in last year’s Groovy Soca Monarch, placing him just five points behind Arthur’s title-winning “Who I Am #West Indian”. The song went on to make more inroads, tying for third place with Hollywood HP’s “I Ready To Work” in the Road March.

Since then, Sedale has continued to hit stages here and abroad and has featured prominently on radio and television stations promoting his music and collaborating with other artistes. But on a deeper level, Sedale believes that staying grounded also means giving back to the art form some of what he continues to benefit from it. He recently took his message and advice to the next crop of prospective artistes.

“We collaborated with the Ministry of Education to have a workshop and school tour,” Sedale told The VOICE. “We went to the schools to promote the arts which often get overlooked in Saint Lucia. So we really need to kind of inject a new energy into the arts by encouraging the students to pursue their passion for the arts.”

Sedale was joined on the school tour by fellow artistes Saveion “Baby Blue” Georges, Michael Robinson, photographer James Adjodha and promoter Lamar Sifflet, who all gave their individual stories of the struggles they face in their respective fields. Sedale said part of the process was to debunk the negative perception some people have about artists and let them know that it’s okay to have a love for the arts.

“It’s time for us to change that,” Sedale stated. “So what we did was let the students know that it was okay to be an artist. Conventionally, children are raised to go to school, get a good education and become a lawyer, doctor, police officer or engineer. But when it comes to the arts, people tend to look down on it. For example, one of my parents never encouraged me to go into the arts. I had to share those stories with the students and you’d be surprised to find just how many children are going through that right now.”

Sedale said the reaction from the students was inspiring. He added that while many of his fans are star-struck by his presence and talent, he remains grounded and focuses on becoming even better. The tour, he said, opened his eyes and mind to many things.

“I’m happy we did that tour, particularly to the schools down south because quite often these schools are overlooked when it comes to certain things. Just being down there with them and seeing the excitement on their faces was very fulfilling and rewarding,” Sedale explained.

Sedale said he found the questions the students asked after they told their stories interesting and also the interaction that followed. In some instances, some of the students performed with the artistes impromptu. The experience, he said, reminded him that Saint Lucia is full of talent that needs to be highlighted and cultivated and that there needs to be platforms in various mediums in order to have that talent and art expressed.

“I would like to see a concerted effort being made as far as the arts are concerned, not specifically music, but all art forms,” Sedale said. “I would also love to see carnival marketed properly and getting a substantial investment. Sometimes it tends to be overlooked, especially if one compares it to the jazz festival which gets a lot of money pumped into it. So I’m hoping that carnival gets the proper attention it deserves and that the new government sees the value in Carnival.”

In preparation for this year’s Soca Monarch, Sedale has released a few tracks, including “Feelin’ It”, “MVP (“Most Valuable Partier”, “At It Again” (with Shemmy J), “Land I Love” (featuring Preedy) and “Bounce Da Daw” (featuring Black Boy).

The second edition of Transcend, a soca show inspired by Sedale himself, will take place on Saturday, July 16 and will feature Preedy, Lyrikal and 1st Klase, as well as local soca artistes. The show’s tagline, #Level Up, implies that the event will comprise three party concepts.

He will also be launching a new clothing line, DTS Clothing, this carnival season as has become the custom each year. Items include tee shirts, hats, dresses, crop tops, V-neck and tank tops.