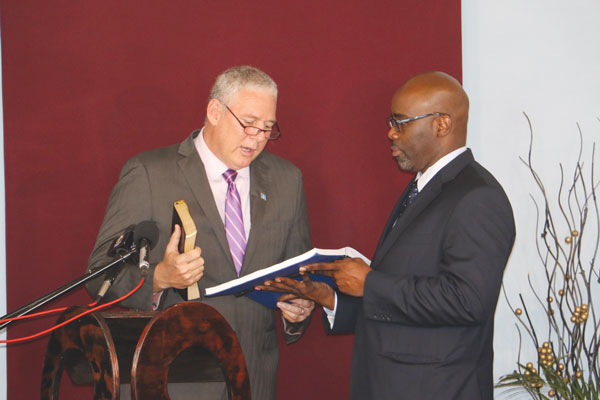 NEW Prime Minister Allen Chastanet has expressed his desire to foster “a far more cooperative and collaborative relationship” with all interests in society, including the official opposition.

Chastanet made the pronouncement in his first official address since his United Workers’ Party (UWP) won Monday’s general elections. The occasion was his official swearing in as Prime Minister on Tuesday at Government House.

Chastanet is expected to announce his Cabinet “in due course”, said a statement from the UWP yesterday.

Chastanet started Tuesday’s address by paying “a particular tribute” to former Prime Minister Stephenson King, one of the victorious UWP candidates in Monday’s poll and two others, former Leader of the Opposition in the last House of assembly Dr. Gale Rigobert and deputy UWP Political Leader Ezechiel Joseph Deputy Political Leader of the party as well as Party Chairman Guy Mayers .

The rest of Chastanet’s address follows:

“Let me start by thanking Almighty God for his intervention, in ensuring that yesterday’s election process was orderly and safe, in spite of the rain and that the outcome was what the majority of Saint Lucians wanted!

As a nation, we have proven once again that Saint Lucia is a mature democracy in which the will of the people always prevail.

This afternoon, I wish to especially to thank the voters of St. Lucia, and particularly those who voted and supported the candidates of the United Workers Party.

We humbly accept the overwhelming mandate you have given to us to oversee and administer the affairs of state, for the next five years.

I wish to congratulate all seventeen (17) duly elected members of the new Parliament of St. Lucia, as well as commiserate with those, on both sides of the political divide, who were not successful on this occasion.

The will of the people, was to give the United Workers Party an opportunity to pursue policies and programmes aimed at improving the standard of living and the quality of life for all St. Lucians.

For this ambitious goal to be achieved, I will require the cooperation and full support of all St. Lucians.

It is for this reason that I wish to signal, from the outset, my desire to foster a far more cooperative and collaborative relationship with all interests in society, including the official Opposition.

My dear people, General elections of 2016 are now all but over, and it is to the future that we must look and work, with a sense of national pride and duty. It has never been and will not on this occasion be the practice of the United Workers Party to gloat.

We are immensely grateful for the confidence the electorate has reposed in us, but, we are also mindful of the enormous job that lies ahead and the high level of expectation that exists among the population, particularly those who voted for the winning party.

The problems and challenges we highlighted in the campaign were real. Twenty-four per cent unemployment and 45 per cent joblessness among the young people is of utmost importance to us. So too are unsatisfactory standards in health care and inaccessible tertiary education for those who wish to go beyond secondary.

We have as a country to arrest the current state of disillusionment and hopelessness among our youth. We also have to provide a more comfortable and dignified existence for our seniors.

All this will require our hitting the road running from day one. And by day one, I mean today, Tuesday June 7.

That’s why I did not declare today a holiday, because I considered it the best way of my signaling to the country that we mean business and are serious about starting the job of building a new St. Lucia for all.

This afternoon, Ladies and Gentlemen, I particularly wish to thank the family of the United Workers Party. I thank you for giving us your support throughout the campaign, for turning up at meetings, reading our literature and sharing it with your families, friends, neighbours and workmates.

Thank you for reaching out to fellow Saint Lucians and convincing them that we were worthy of their consideration.

Thank you, fellow Candidates, for the enormous energy and expertise you brought to the campaign. Thank you for preparing yourself so carefully for the role of Parliamentary Representation. Thank you for listening to the cries of our people and helping to draw up the policies and programs that we shall pursue, in our quest to build a new St. Lucia.

Thank you, my dear wife, Raquel, my children Braden and Ryan for sharing me with the extended UWP family and the wider St. Lucia. My dad, Michael Chastanet, has been simply amazing! Thank you dad, for standing by me, shoulder to shoulder, in this campaign, which for us in the UWP, stretched back more than three and a half years.

“Thank you to Saint Lucians – of all categories – for listening: and for going out in large numbers yesterday and exercising your constitutional rights.

All the reports I have received indicate that you had been quietly queuing throughout the day waiting for your turn to make your choice despite the rain. Yesterday, you voted for change. And the United Workers Party is ready to bring about the change you want.

In conclusion, I want to seize this opportunity to renew our commitment to deliver. As you know, we have a team of leaders in the United Workers Party who have a track record of achievement and management. We have all had experience of creating and/or managing wealth and other resources. We also have a policy in the UWP to share this wealth more equitably through employment and universal social services.

“We know that an economy thrives when money circulates fluidly through the local economy. So we shall put money in people’s pockets. This commitment is not just to those who voted for the United Workers Party. It is to all Saint Lucians.

“From today, I want us to set aside political, ethnic and class barriers and pull together to make Saint Lucia one of the best places in the world, to live, to work, to study, to do business, to visit and to enjoy life. From today we shall begin to plough the land and plant the seeds together.

All we are asking you to do is to help us protect and grow our new economic and social plants in Saint Lucia. When harvest-time comes we shall all share the produce equitably.

“Thank you for the trust you have placed in us. Thank you, God, for seeing us safely and peacefully through this day. This is a great day for St. Lucia.