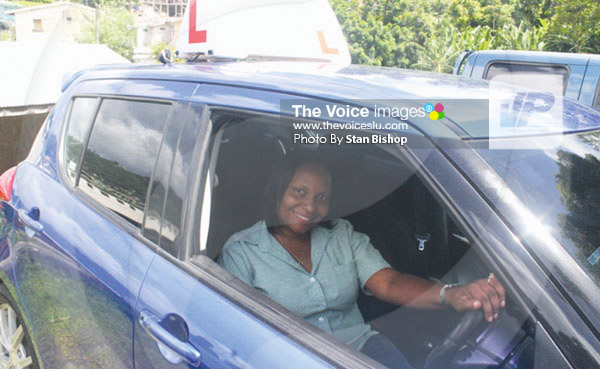 KISHA Baptiste’s drive to succeed in business has seen her travelling down a road less travelled by many female professionals. Of the 70 driving instructors in Saint Lucia, she is one of the only five women preparing student drivers for the precarious road ahead by imparting them with the information they need to remain safe.

The manager of EZEE Driving School started her business about three years ago after spending seven years as a Data Entry Clerk at the Ministry of Transport as a Data Entry Clerk. She has eight years’ driving experience and received her instructor’s licence a year ago. The big step to branch out on her own, she said, was a bittersweet one.

“Actually, I didn’t really want to quit my previous job at the Ministry,” Baptiste told Strictly Business. “However, it was a bit challenging working there. It was sort of a political thing there and a lot of frustration. In the end, I felt I could do better than that and after discussing it with my family, I decided to open my own business.”

Located on Chaussee Road above Ray’s Refrigeration, EZEE Driving School is Baptiste’s way of being her own boss in an environment where jobs are hard to come by. With national unemployment being as high as 25 persent, Baptiste said she has no regrets in switching her old job for the new.

“It has been very challenging but rewarding up to a point,” Baptiste, 37, said. “It gives you that sense of self-development knowing that you can actually influence especially female drivers in overcoming much of the road rage they go through. I try to calm them down a bit and pretty much help them improve on their driving.”

A typical business day at EZEE Driving School begins around 6:30 a.m and runs into late afternoon. While an average of a dozen students are taught per day, Baptiste said she and the other instructor often do not get a break for lunch. Moreover, apart from being a driving instructor, she also conducts the theory classes at the office, assisted by her retired mother.

Like every other business, Baptiste said EZEE Driving School does experience its ups and downs as the driving school does have its peak season and low seasons. However, she said she tries to not take people’s money without giving them value for it.

“It’s not just about only having a business, but also having a business that people feel comfortable with the services provided. It’s not about taking people’s money and keeping them for longer than the period they should take to get the driver’s licence,” Baptiste explained.

Part of Baptiste’s satisfaction on the job comes from reasoning with especially her male students, many of whom initially exert their male bravado about knowing everything there is to know when sitting in the driver’s seat. However, they eventually tear down that defensive wall and see things their driving instructor’s way.

“We offer the minibus package and I think that is the most difficult part of being in this business. Many of the men who come to us believe they can drive. As such, they don’t think they need to take the classes. So as much as we try to encourage them to learn, some of them go to the practical exams and fail.”

Baptiste has high hopes for her business, including opening branches across the island, especially in the south from which many requests have been pouring in to have an EZEE Driving School office. She also intends to target secondary school students by rewarding them with free driving classes.

Baptiste, of Old Victoria Road, The Morne, currently serves on the secretary of the National Association of Driving Schools of Saint Lucia. She said not enough examiners are at the Ministry’s disposal to ensure efficiency in terms of students getting their drivers licence. For instance, she said that students who would have failed their practical exams often have to wait months before getting retested.

“Right now, I have a backlog of 20-something students who cannot get another chance to do the exam because of the number of people waiting to do their exams,” Baptiste lamented.

Her advice to other entrepreneurs is to remain focused and resilient: “There are times when business is slow that people tend to want to give up. But we should always remember that life is all about overcoming challenges. Not giving up is one of the key factors that we should wake up with every day as our goal.”

Apart from offering professional services to road users, Baptiste hopes that being a trailblazer in a field dominated by men would inspire other women to follow suit by not only becoming driving instructors but also being economically-independent.