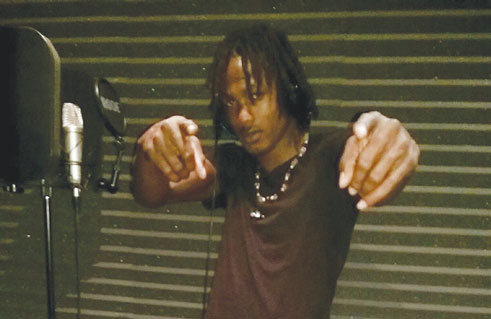 SOMETHING’S a brewing and it’s all locally made.

Carnival season is here and has finally taken the hype away from this month’s general elections, but a number of individuals have been coming out and stealing some of the spotlight from the well known soca artistes who are getting set to rock the local airways.

When you switch on the radio these days, you will hear DJs playing music from up and coming artistes who are seemingly unknown.

Well, today’s FITC is one of them and he is asking the public to pay attention to them as they have their eyes on the prize and they are hungry for it.

Hector Berthia is a 22 year old soca artiste from Anse la Raye who has been making music for over five years.

The avid sports fan tells The VOICE about the struggles faced by artistes like himself for a number of reasons including discrimination, as well as being labelled for the mistakes of other newcomers like himself.

The genre of music which has become increasingly popular in local parties and fetes has raised a lot of controversy as many of the songs include derogatory and or explicit lyrics which leave a bad taste in many mouths. But Berthia says that not every artiste goes down that route and today he wants to set the record straight.

The VOICE: When and why did you decide to get into the music business?

Hector: I started in Form Four going on to Form Five in Secondary School when I did my first carnival song with a cousin of mine. It was a home recording but then I started to get into the vibe. Shortly after, I got introduced to a real studio called Ransom Records in Anse la Raye Studio Nine where I started doing beats and other stuff. That’s when the music vibe really started to flow through me and I started putting it down into words to do my thing. I usually freestyle but whatever comes to mind, I just record and do what I have to do in the studio. I just block everything out and put my words down on a beat.

The VOICE: Did you have anyone at your back encouraging you along the way?

Hector: Yes definitely. I actually want to thank my cousin Vivian, and Lance Florent. Normally, they would listen to the music and at times they would give me jokes and pressure but then they would tell me that I’m getting there and they would push and motivate me. From the time I get that energy, that’s the type of energy I want to go to the studio with, knowing that there are people who actually listen to my music and thinks it’s good…family having my back, it means everything to me.

The VOICE: Do you think that this is a good career path that you see yourself making a decent living on?

Hector: Kind of, but the only problem is that Lucians don’t really support local, But on the other hand, I don’t blame them because some guys overdo it because they sing about negativity and they put stuff out there that people, especially children are not supposed to be listening to. But once you take your time to build your music, you could actually polish it in a way that people will enjoy it.

The VOICE: Now that you’ve mentioned the children and listeners, I can say that some of your songs are on the raunchy (and some might say vulgar) side. What do you have to say about the move by so many up and comers in that direction?

Hector: You can make two types of songs about women; you can make something good or bad. You can describe how a woman looks in a song and make her feel good and then you can on the other hand say something very negative, make them feel bad and low in self esteem by dissing them. It’s up to the artistes and the way that they think. You have to think about your audience and not what you think sounds ok or what you think would look good in studio. You have to think of what the people want and try to look at it from their point of view.

The VOICE: The genre of music has and is growing in popularity and you hear it over the radio and in public a lot and you can say that they are not doing you guys favours because the versions that they play could be damaging to your career. What is your take on that issue?

Hector: I don’t really blame the DJs but sometimes, before the song leaves the studio, you could actually talk to the producer to cut out some of the things that are not made for radio. There are also times when the DJs also feel the vibe and they just let it run just like we do or there are even times when they play the track by accident. So yeah, I wouldn’t blame the DJs, it is our responsibility to really police what goes out there. On the other hand, some of them really need to support local because some people try to bring us down and it is kind of hard when you go to perform at an event and sometimes, the people don’t even know who you are. They need to understand the vibe and you cannot just judge people.

The VOICE: With that said, when you look at islands like Trinidad, Barbados, ST Vincent, the quality of music is clearly miles ahead of a lot of the local music in St. Lucia, and locals are fighting hard to catch up with the rest of the Caribbean. Looking at the quality of music that the newcomers are producing, where do you think that quality stands and what do you think needs to be done to even get us in the race?

Hector: I would say that the new people are definitely lacking a lot but they just need a little more push and support. If a new artiste can get advice from the artistes who are higher up like Ricky T and one of the others who have travelled internationally to perform, you know, someone who could tell us how we have to be and move to get the momentum and vibe going, you will have to be able to grow. But in reality, it’s just a fight down thing where man is watching man and who is better that who. We have good music here but it will never reach far because people just don’t seem to want to see each other move forward and there is a real struggle to break loose from the chains holding you.

The VOICE: If someone who has been in the game were to work with you, would you be willing to listen and adhere to their words of wisdom?

Hector: I always get advice. The studio I’m with now, J-Buds (a fellow musician and past winner of Soca Superstarz) used to record at the studio but left, but now we have Mongstar.

The VOICE: There is no doubt that St. Lucia is overflowing with talent. What would you say to the hopefuls who have the skill set to becoming writers, directors etc, but they are on the verge of giving up. What would you like to say to them?

Hector: It’s not always wise to give up. You must never quit trying but then again, don’t just sit one place and expect it to happen. Try getting in touch with people. You must know someone that knows someone.

The VOICE: Like you rightly said earlier, people might know your songs but don’t know you. Could you please introduce yourself to the readers?

Hector: (Sings) “Roll like a car tyre, or a bike tyre, Wine to de beat, and touch your feet” (Laughs) I would like to tell them to just listen to the music and try to have fun. Don’t try to pick out the negativity or try to make it seem like something bad…just enjoy yourselves and live life. One life to live. I want to take this opportunity to thank Studio 9, Infinite, Yogi, my brother Brad who is the other artiste that I normally sing with and Danny Robinson. I want to shout out my entire team and family for all what they do to help me out in my career and Shaniah.