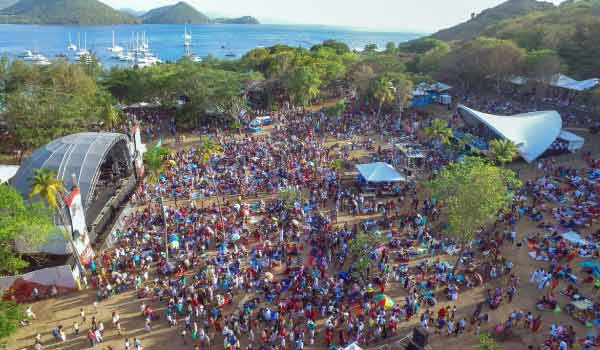 SLTB Reports A Number Of Successes, Including Ticket Sales.

EARLY indicators are telling a story of a number of successes achieved from the staging of the 25th anniversary celebration of the Saint Lucia Jazz & Arts Festival, according to the St Lucia Tourist Board.

In a release issued Monday, a day after the conclusion of the event, the SLTB said that among successes were record attendances on each night of the mainstage events, sold-out venues well before gates opened, the vision for the infusion of the Arts being more fully realized and unprecedented levels of accommodation occupancy in the north of the island.

Deputy Director of the Saint Lucia Tourist Board (SLTB), Tracey Warner-Arnold, reported that ahead of the analysis from event surveys and the Festival’s exit survey which will give a more comprehensive assessment of the various operational aspects, lineup satisfaction, visitor arrivals and patronage, a number of clear indicators had emerged which validated some of the choices and decisions made for the Festival this year.

“Well ahead of the opening of the gates for each mainstage event, we exceeded ticket sales from our best prior years,” Warner Arnold said. Numbers to date showed at least 1,000 more patrons consecutively at Pigeon Island Mainstage Saturday and Sunday in 2016 over the year 2010, which until this year, recorded the highest level of patronage ever.

According to the SLTB Deputy Director, this kind of success is gratifying and encouraging and highlighted the attractiveness of the lineup and the effectiveness of the festival marketing.

In his analysis of these numbers, Director of Tourism Louis Lewis said it validated the line-up as one that could achieve three essentials, namely commemorate a world class journey, bring the sing-along dynamic for Mother’s Day, and cater to a range of tastes while also remaining true to the foundational jazz roots of the Saint Lucia Jazz & Arts Festival.

On the strength of public opinion recorded via social media and event patronage, the 2016 Arts Component was described as having exceeded expectations.

“The Arts component for us has been the crowning glory of the Festival because in three short years we were able to demonstrate the vision we had for a Festival that is authentic to the destination in all its cultural and creative dimensions, and not one that resembles or patterns itself from any other,” explained Director of Tourism, Louis Lewis.

In his assessment, the close SLTB and Cultural Development Foundation (CDF) partnership added a value to the Festival which will be felt for years to come as an ideal model where a credible, colourful and compelling Saint Lucian aesthetic is infused into the Festival.

According to Lewis, the visibility and educational value which the CDF/ SLTB collaboration achieved with respect to three national heroes – Sir Derek Walcott, Virginia Alexander and Sir Dunstan St. Omer – were significant because the Festival must also be evaluated in the context of sectoral development, and growth opportunities for Saint Lucian artists and artisans.

He said: “These three icons epitomize the excellence of Saint Lucia’s literary, artistic and dance product. They are the bar, and creating a space within the Festival to tell their stories, showcase their journeys and celebrate their achievements does much for education and national pride.”

This year, the Arts infusion included a two night run of Sir Derek Walcott’s “Omeros” by Shakespeare’s Globe Theatre, the Cultural Icon Series tribute to dance legend Virginia Alexander and the erection of an Arts Village which, according to the SLTB Director, served the aim of making the Arts a core part of the Festival programme, a model which will continue for the years to come.