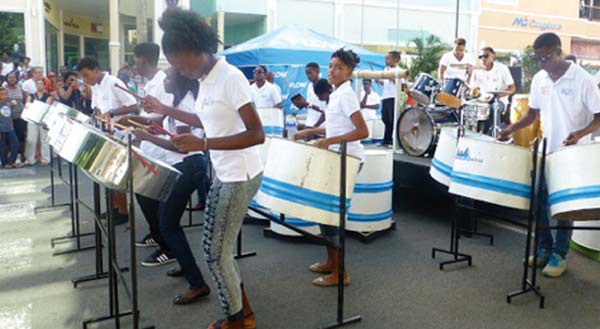 THE curtains have officially come down on what was an energetic, engaging, not to mention enjoyable 2016 National Arts Festival.

This year, with renewed efforts to reach out to communities across Saint Lucia and give a voice and platform to artistes in every genre of the arts, the Cultural Development Foundation through the National Arts Festival (NAF) partnered with other organisations in presenting the events which form part of the NAF 2016.

The Festival consisted of five major activities catering to a diverse audience of creatives across communities; two Community Festivals, a Street Theatre Event, Artists’ Market, Poetry Live Session and the Cultural Icon Series. Of special note, the Foundation provided training in theatre, dance and creative writing in keeping with its mandate of developing Saint Lucia’s vital human resource within the arts sector.

March 30 – April 6 brought together a total of 12 participants who were guided through the rudiments and various strands of scriptwriting by facilitator, Kentillia Louis. According to Celeste Burton, Director of Training and Promotion at the Cultural Development Foundation, “encouraging young people in Script Writing can only do well for the country as it will provide a resource through a collection of local plays and skilled playwrights…”

At the end of the six-day training exercise, participants produced a script for the CDF’s Youth Summer Arts Platform 2016 complete with dialogue, song and dance founded on some of Saint Lucia’s major cultural traditions.

Training workshops in Theatre Arts focusing on the development of acting, speech and voice techniques were held in Vieux Fort and Castries during the months of March and April. Mrs. Dorethea Joseph and Mrs. Esther Matthew, two trained Theatre Arts teachers facilitated these workshops in the respective communities. A similar workshop took place in the south-western community of Soufriere. The Soufriere training sessions were tutored by cultural educator and experienced actor, Kennedy “Boots” Samuel. Voice, vocal range and flexibility are elements that play a key role in dramatic impact during any public performance. This workshop placed emphasis on the use of the voice as an instrument, breathing techniques, voice quality, resonance, pitch, enunciation, projection and speech variety among other related areas.

Saint Lucia born UK based dancer; Kiraly St. Claire along with his dance partner, Anna-Kay Gayle; Jamaica born and UK based, conducted a two-week workshop (April 22 – May 6) in Modern – Contemporary Dance. This dance technique training was specially formulated for dancers 13 years and older and aimed at developing 1) body conditioning and sculpting techniques, 2) dance basic techniques, 3) choreography related to dance genres including contemporary, jazz as well as commercial dance (a mixture of Hip Hop, Vogue and Waacking). The 21 participants who expressed sheer delight about the content of the 40 hour programme also honed their skills in floor work, improvisation and choreographic as well as performance techniques.

Organizers in the communities of Vieux Fort and Soufriere must be commended for their demonstration of great initiative in executing noteworthy community festivals on April 23 and 30, respectively. The celebratory activities showcased that an abundance of talent exists within communities around the island and that there is a need to continue to create opportunities for growth and development of the same in enhancing the creative sector. Despite having lost popularity from the 1970’s and 1980’s, a Street Theatre Event set in Constitution Park on April 29, provided evidence that hope remains for theatre in Saint Lucia. The work of extraordinary Saint Lucian poet, John Robert Lee took centre stage during Poetry Live through music, dance, painting and of course, poetry. The evening’s performances provided snapshots of the author’s 40 year poetic journey.

A collaboration among the CDF, JQ Rodney Bay and Baywalk Malls, together with other partner organisations, saw the successful staging of Artists’ Market, which for three days presented the creative work of artisans for display and sale in an interactive street market atmosphere. Entrepreneurs showed off their wares which included Saint Lucian books, clothing, jewellery, confectioneries as well as home décor items. From 6:00 p.m. on May 5 and 6, the malls took turns in providing free concerts to the audience, who lined the strip and enjoyed the infectious music of acts such as Ronald “Boo” Hinkson, Irvin “Ace” Loctor, Zouk and the Gang Roger Eckers, the Laborie Steel Orchestra and Skip Monday.

The Cultural Icon Series was conceptualised and designed to celebrate iconic Saint Lucians’ creative journeys; their youthful ambitions; inspirations; hurdles; successes and adventures. Into its second year, the 2016 edition of the Cultural Icon Series, honoured the work of Alexander, in an exhibition at the Blue Coral Mall; chronicling the life of the dancer and choreographer through photographs, videos and biographies. A celebration of the life of dance in Saint Lucia was presented in the form of a tribute concert to Julienne “Aunty Virgie” Alexander on May 1 which saw the likes of Micole Aubertin-Murray, Shakeena President-Beckford, Tania Isaac-Hyman, Kiraly Saint Claire, Trevor King, Barry George, Shem Heliodore, Mellisa Reynolds, Carlton Ishmael, among many others.

The Cultural Development Foundation has expressed its gratitude to the many corporate sponsors, arts lovers and all the creatives who offered their support towards another successful National Arts Festival.