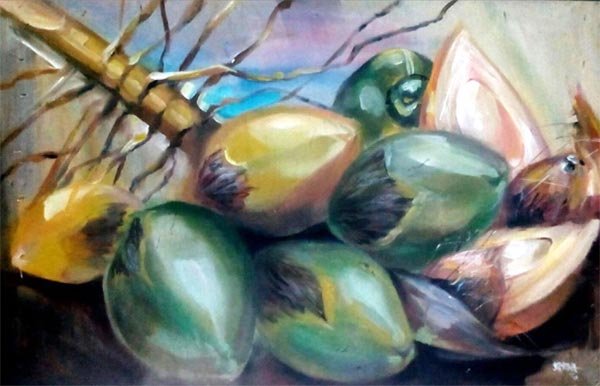 SABRINA Romulus drew her first portrait when she was in Standard Two at Ave Maria Girls’ Primary School. The girl, whom Sabrina used as the subject of the portrait, said she didn’t like it and Sabrina swore she would never attempt another portrait. But that all changed when Sabrina later became more confident in her craft and kept on trying. Today, art is still her heart.

The 25-year-old visual artist said she’s always had a love for art, influenced by the process as a child ever since she saw her mother, a seamstress, drawing and cutting out patterns to make dresses. By the time she went to primary school, Sabrina’s interest in art was so deep that her teachers even wrote in her report book that while she needed to focus on her academics much more, her aptitude for art was a noteworthy plus.

Romulus later attended the Castries Comprehensive Secondary School where she took up art as a CSEC subject and got a Grade One which, she said, remains one of the best highlights in her artistic career. She also did a few murals there. However, two weeks after leaving secondary school in 2007, she started to wonder about becoming employed. A friend of hers suggested that they walk around and check out different art galleries and gift shops.

“I had a lot of sketches from my school days with me at the time,” Romulus said. “So we ended up at the Inner Gallery where I met Rachael du Boulay and got a job there as a picture framer for about two and a half years within which time I was also painting.”

Learning the picture framing skills at the very beginning of her career, Romulus said, helped her in a big way. But she also wanted to do other things, which resulted in ending up on the beach at Sandals La Toc where she painted and sold her work to the guests.

While selling on the beach she was able to meet people from all walks of life. Through interacting with them, she also got an idea of what people liked and what sold. But it was a hard hustle afterwards and she soon left there.

The self-described free spirit said she’s an all-rounder when it comes to art but works mainly with acrylic. But she’ll paint on just about anything that inspires her, whether it’s in the form of stretched canvas, canvas panel, portraits, murals or body painting, which is why she takes her craft as seriously as she does, even mentioning the word “art” over 50 times in our 16-minute interview.

Sponsored | Article continues below
“My work is about expression and creativity, so I always go into it deeply. Art is more than a job or a career for me. It’s more of a lifestyle,” Romulus said.

Romulus currently paints at her Pavee, Castries home but hopes to own her own gallery soon. For now, though, her pieces can be found at the Arts Café, Inner Gallery, Island Mix, Bel Jour, Cap Maison, Chef Robbie’s and Windjammer Landing.

She even hosted an art exhibition as part of last December’s Atlantic Rally for Cruisers (ARC) activities. Among her display there were works created through a campaign she started via her Facebook page a few months ago soliciting photographs from people to be used as subjects for new pieces.

She has since received much praise for her efforts but is still struggling to become a big name on the art scene. She is currently preparing for the upcoming Saint Lucia Jazz & Arts Festival in which aspects of her talents will be showcased. The opportunity can prove to be her best foray in gaining the exposure she and her work desperately need.

“Right now, I’m trying different ways to put my work out there because I have no one helping me,” the young artist said. “So I’m just winging it by trying different things, hoping that they would succeed.”

Among Romulus’ main priorities are attending university to study art and having proper management to guide her through her decisions, including coming up with a business plan. While she does plan to become an acclaimed artist not unlike the vast pool of Saint Lucians that have brush-stroked their way to international recognition, Romulus knows she has a daunting task ahead. But she’s had some experience with facing challenges, just like the one she overcame after drawing her first portrait in Standard Two.

“I love what I do and I take it with the ups and downs,” Romulus said optimistically. “But I’ve been living off my art all my life. Just lock me up in a room with a chair, canvas, easel, paint and a brush. I don’t need anything else.”