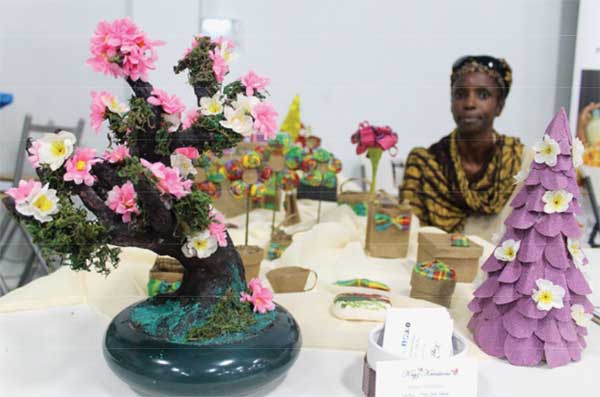 A great business idea can be sparked by many factors. In fact, some of the world’s greatest inventions came about through necessity while others were as a result of bettering what existed. But when an idea comes about by accident, one is left to wonder at the incredible magic that exists in the marketplace.

Allison Halliday’s business, KayzKreations, is one of Saint Lucia’s newest small businesses. Formed less than a year ago and based in her Vide Bouteille, Castries home, Halliday said her business is already thriving and she has since tried her best to grow and understand the market as much as possible.

As she tells it, KayzKreations came about after brainstorming an idea she had to market an unrelated product. However, the problem arose after she realized she wanted nice little packages that could be used by visitors especially who wanted to take something back home.

“That plan didn’t go exactly as we wanted it to,” Halliday said. “But another idea sprang from it: making hand-made wedding favours. We ended up doing other things, including bonsai, greeting cards, flowers and gift boxes.”

Since then, the business ideas have blossomed into something really nice and KayzKreations is very much interested in the niche market of people looking for something different. Most of the handicraft items are made from burlap material because of its versatility. But some are accentuated with a bit of madras material to give them a local flavour. Customized pieces can also be ordered.

Halliday listed sourcing the burlap material as one of her major challenges because when supplies run out, it’s difficult to find it locally. She added that a lot of time and effort go into creating the pieces and thinks customers need to take that into account when it comes to pricing.

Over the past few years, many small businesses have cropped up in Saint Lucia, many through necessity to curb the high unemployment level, others through the need to augment incomes. Halliday believes the small business sector needs all the assistance it can get to reverse the growing dependence on imported goods and services.

“We import so many things into Saint Lucia. But I think we need to come up with ideas, plans and designs that can really work. If we have people trained in developing great products that are exemplary, that can work to our benefit,” Halliday said.

By the time The VOICE caught up with Halliday at last year’s Saint Lucia-Taiwan Partnership Trade Exhibition, she had already participated in the Love Elevated Wedding Symposium held a few months earlier. She described the experience at both major trade showcases as crucial to her young business’s growth, especially since she was able to network with other small business owners and customers.

Halliday said KayzKreations’s potential for the future looks good and other novelty items will be added to her catalogue in time. Her advice to other small business owners is to seize on great business opportunities they have a drive and passion for and keep following through with hard work.

For orders, Halliday can be contacted at 286 9968 or kayzkreations7@gmail.com.