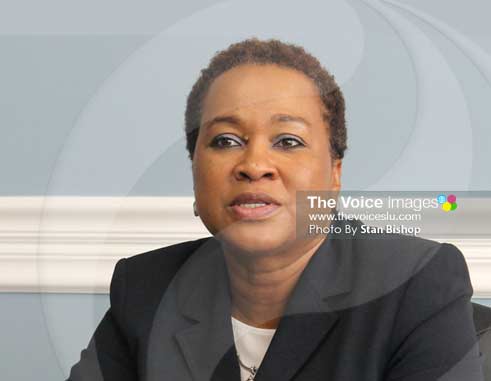 SAINT LUCIA Tuesday opened a brand new division of its civil court that will cater solely for commercial and business disputes.

But more than that, this new division within the local judicial system, is being touted as a stimulus for improving the country’s business environment and easing the extremely high and burdensome list of cases in the civil court.

It is also hoped that the court will improve Saint Lucia’s efforts at enforcing contracts in which it is lagging behind other countries, according to Tara Lisa Persaud of Compete Caribbean, a private sector development programme based in Barbados that provides technical assistance grants and investment funding to support productive development policies, Small and Medium Size Enterprise SME development activities in the Caribbean region.

She said that while Saint Lucia is recognized as a regional best practice in the quality of its judicial process, scoring 12 out of 18, well above the regional average of 9.5, its overall score for enforcing contracts is only 67.

“This means that time and cost do have serious implications. It takes 635 days, nearly two years to settle a commercial dispute here, 444 days to trial and judgement and 180 days to actually enforce the judgement,” Persaud said, adding that Antigua and Barbuda is the best performer in the region in that the whole process takes only 351 days and in Singapore, which is the world leader in enforcing contracts it takes only 150 days.

Mary Juliana Charles, President of the Saint Lucia Bar Association hailed the opening of the Commercial Court as timely since, she said, Saint Lucia can use all the help it can get to improve its ratings for doing business.

OECS Chief Justice, Her Ladyship, Dame Janice Perreira noted that while the new court was fashioned to a large extent after the one in the British Virgin Islands, which is now an integral pillar in the BVI’s economic development, it will greatly assist in the timely and efficient resolution of commercial disputes with the objective of claiming its pride of place in propelling Saint Lucia’s economic growth.

“The efficient and effective operation of our court is pivotal and integral to ensuring investor confidence and must be seen and embraced as one of the pillars for driving economic growth in any country. One only has to look at what court reforms, underpinned by government support in Singapore has done for that country,” Perreira said.

“I firmly believe that all small countries with limited or in some instances non-existence natural resources can do the same by harnessing our human and technical skill sets by becoming world class centres for international dispute resolution,” she added.

The OECS Chief Justice was also of the view that the commercial court in Saint Lucia will not only have the effect of stimulating economic activity for the country but, also play a part in deepening the sub-region’s integration movement.

“The court is well placed to play an integral role in this integration process,” Perriera said.

“I wish to emphasize that every part of the legal system is important and the government is committed to providing resources to the various components of the legal system within the context of its resource constraints. Having said this, there are several reasons and benefits of having a Commercial Division of the High Court,” the Prime Minister said, adding that the specialized Commercial Division will ease the burden on the Civil Division of the High Court and will result in quicker resolutions to commercial disputes and that hopefully this will improve the efficiency of the judicial system.

He noted that another benefit would be an increase in Saint Lucia’s competitiveness.