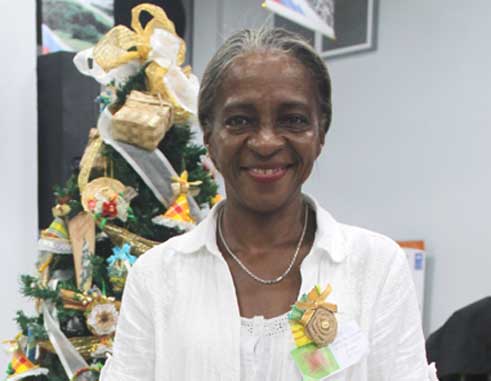 This tireless artist/businesswoman has the kind of creative energy running through her blood that might perhaps sum up the Saint Lucian spirit of enterprise. Despite many setbacks, however, Edward’s spirit remains unbroken.

Edward started her own business, Shirley’s Creations, about 26 years ago making handicraft items. With the help of the Ministry of Commerce, she has since represented Saint Lucia at various trade shows regionally.

Edward said that her creativity began to surface when she was about three years old. People visiting her parents’ home recognized her talent, she said, which has continued to manifest itself in many ways.

“I always tried to be innovative,” Edward said. “When I grew up, I would decorate events for people. But I wanted to get into producing things. So I began painting and later took up making angels.”

About 20 years ago, Edward went to Barbados for a trade expo where she showcased her items, such as decorated dolls. The response she got was not what she expected because people were not really into what she was doing. But she didn’t give up. After nine years of ostensible epic fails at attracting the right customers, the feedback she got in Barbados was eventually rewarding.

Edward said the turnaround came in 2008 when she began making her eye-catching angels which immediately drew people into her work. Since the trade expo was held just weeks before Christmas, she took the chance to do something different – which paid off beautifully.

Soon, her pretty angels were being used in television advertisements here. Buoyed by that confidence, Edward has since committed to creating angels that suit any season of the year, including Independence, Christmas and JounenKwéyòl. The angels, dubbed “Shirley’s Creole Angels”, feature prominently when Edward gives back whenever local associations host fundraisers.

Sponsored | Article continues below
“They’re unique,” Edward told me. “They have a Saint Lucian Creole feel. They’re not imported but instead handmade by me. For every piece I make, I use a different pattern and design because while I am making a piece the ideas come to me.”

For the Christmas season, Edward’s angels can now be found hanging from beautifully-decorated Christmas trees in either white or madras colours. She also offers photo frames, decorated dolls and other novelty items for sale.

Edward, who currently has an outlet for her trendy products upstairs La Place Carenage on Jeremie Street, has also represented Saint Lucia at trade shows in Saint Kitts, Saint Maarten, Grenada and Antigua.

Aside from handicraft, Edward also specializes in painting on canvas, oil painting, decorating events, and face painting. Back in the day, she was also a consummate dancer, joining a dance academy run by the Extra-Mural Department.

Edward has participated in the Saint Lucia-Taiwan Partnership Trade Exhibition ever since its inception eight years ago except for last year when she had to travel. At this year’s exhibition, she was able to do more networking with other exhibitors, including buying brooms from one supplier which she would later decorate.

The exhibition, she said, has grown and is paying dividends. In fact, she received a few orders during the three-day exhibition held last month at the Johnsons Centre in Rodney Bay. These kinds of spin-offs, she said, are what her business desperately needs.

“When this exhibition started eight years ago, there were about 10 Saint Lucian companies,” Edward said. “Today, there are over 50. So it goes to show that more Saint Lucians need to support what we can do and have to offer.”

Edward said her major challenges include Saint Lucians not embracing local products as much as they should and getting materials which are usually costly and have to be imported. Nevertheless, the talented craftswoman who at three years old made a dress out of paper for her doll advises other entrepreneurs to tap into their talents and find their niche.

“Just go for what you want. Put in the love and the passion and it soon pays off. Don’t just do it for the money. I love what I do. Besides, if you love something, you’d put all your passion into it,” an indefatigable Edward explained.