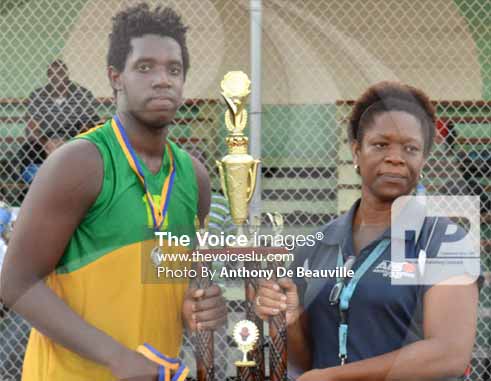 SOUFRIERE Comprehensive Secondary emerged champions in a sudden death penalty shoot out in the under – 19 inter schools football champions on Thursday in front of a capacity crowd at the Sab Playing Facility.

The boys from Sulphur town nosed ahead in the 16th minute when No.10 Antoine Wilfred eluded the Sir Arthur Lewis Community College custodian to send them one up, but that celebration was short-lived as SALCC No. 3 Anton Paul got the much deserve equalizer in the 28th minute.

Both teams squandered scoring opportunities in the second half. No goals scored and with the fading daytime light it was decided that the deal would be settled with a penalty shootout. The boys from SCSS held their nerve after the first five penalty kicks with the score locked at 4 – 4, but eventually won 7 – 6 winning in sudden death.

For the third place play silverware Vieux Fort Comprehensive Secondary defeated St. Mary’s Colleague 6-1. The goals for Vieux Fort Comprehensive Secondary were scored by Nyrone Winter with a hat trick in the 2nd, 22nd and 46th minutes, Sherwin Simon in the 25th and 33rd minutes and Dalyan Johnson in the 12th minute. SMC’s lone goal was scored by Nangee Phillip in the 38th minute.

In under – 15 netball played at the Beausejour Indoor Facility it was all Soufriere Comprehensive defeating Micoud Secondary 26 – 16, while St. Joseph’s Convent defeated Sir Ira Simmons 20 – 10.

It was sweet revenge for St.Mary’s College Under – 15 Basketball Team following the defeat of the under -19 counterparts the previous day at the hands of Sir Arthur Lewis Community College at the same venue. SMC defeated neighbours Castries Comprehensive 37 – 14 to win their third consecutive under – 15 championship.

On Wednesday the VigieMulti Purpose Sports Complex was ablaze for the Consolidated Foods Limited and DIGICEL sponsored inter schools basketball third place play and finals in the under – 19 categories in front of a large crowd of students and staff members representing the final four.

In the grand final Sir Arthur Lewis Community College with 1 point adrift in the first quarter (22 – 23) maintained their composure and showed maturity for the duration of the encounter to take their second consecutive championship 64-47.

For the third place silverware Vieux Fort Comprehensive Campus B trounced Babonneau Secondary 71 – 5 in what can best be described as a lopsided affair.