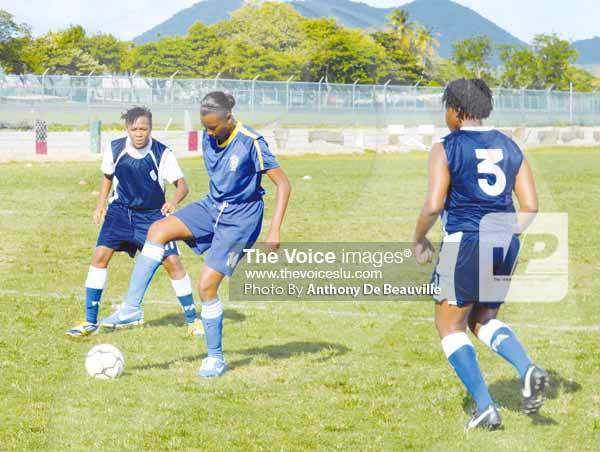 FINALLY it’s off and running as St. Lucia’s young and aspiring female footballers within the school system have been given a chance to exhibit their talent’ on the square in the Secondary School Sports under the banner of the Ministry for Youth Development and Sports, the Ministry for Education and the St.Lucia Football Association.

Youth and Sports Director Jim Xavier spoke to The VOICE about the latest sporting discipline on the school sports calendar.

VOICE: Finally you have the women’s football up and running.

Xavier: Yes finally the long awaited female inter school’s football competition is up and running. We are happy as a Ministry. The venue is a good one; we ensured that all amenities are in place especially when you have women involved. The changing rooms are in place and that also includes the VigieMulti Purpose Sports Complex and the facility at the Sab, so the girls are well taken care of .

“The only thing is the support, the publicity we need to step up on the promotion and to get more persons out there, especially the students and parents to come and support the various participating teams. It is a tremendous effort on the part of the SLFA and the Ministry to bring female football into the school system”

VOICE: You’re about to wrap up the basketball, boys football and netball in the coming days. What’s your take on this year’s tournament thus far?

Xavier: We are happy with the way school sports has been organized this year. We are on course in terms of the finals for the basketball, netball and football. We are also going to step up the promotion with a series of road shows along with Digicel. The Minister for Youth Development and Sports will also be making the trips to the various schools that make it to the semi final round. Our intention is to develop stars through school sports”.

Meanwhile, in action ont he field in Group A played at the Corinth Playing Field, Sir Ira Simmons Secondary won over Babonneau Secondary 3 – 0.