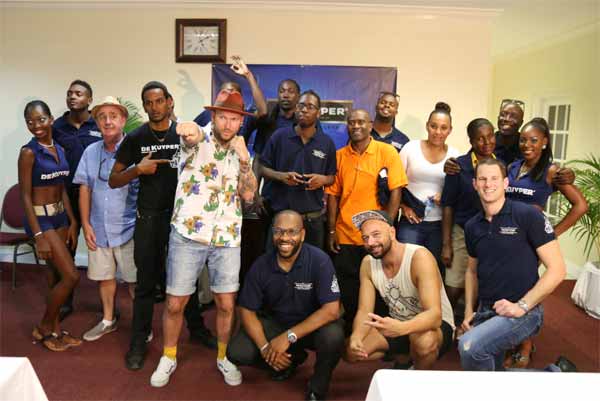 ORGANIZERS of the first ever De Kuyper Bar Fights have hailed the event as a resounding success.

Peter & Company Distribution, distributors of De Kuyper, and organizers of the event were able to attract a number of bartenders to the event. De Kuyper is a popular brand of Liqueurs and Spirits widely used in cocktails.

The De Kuyper Bar Fights was launched here on September 4 and culminated on October 27. The competition encouraged bartenders (with or without experience) to share their cocktail creations with the world by producing a video during the process. That was the first part. De Kuyper and Peter & Company reps also traversed various bars and restaurants around the island, inspiring bar tenders to go the extra mile and become more creative with their cocktail creations.

“The response we got from interested persons and ultimately participants was most encouraging and the final outcome of the cocktails they were able to produce were out of this world,” says Germaine Serieux, brand manager at Peter & Company.

After several entries, it came down to five videos making the cut to the finals and online voting, on Monday October 26, on the Sip in Paradise Facebook page.

The second component required the creation of a stunning cocktail on location before a panel of judges.

Ahead of the announcement of the results, Peter & Company Distribution hosted the 1st Annual De Kuyper Master Class Programme on Tuesday October 27 at the Bay Gardens Beach Resort. The activity was open to all interested bartenders and designed to better equip bar staff with the necessary skill sets to create some of the world’s most exciting cocktails using the unique “flavours of the islands.”

The day’s proceedings included mixology and flair bartending master classes and flair demonstrations hosted by Brand Ambassadors out of Spain and Holland bringing together a wealth of experience to bartenders with companies like Sandals, East Winds, Ti Kaye to name a few, taking full advantage of this limited opportunity.

The actual De Kuyper bar fights were held at the Sand Bar at the resort. In the end the winner who prevailed was Alexander Louis of Windjammer with his creation of a mix of mango and Blue Curacao flavoured De Kuyper.

Coming out on top as well in the online cocktail competition was Shervin Thomas of Treasure Bay Casino followed by Javon Daniel of Delirius and Lex Joseph of Bay Gardens.

“On behalf of Peter & Company Distribution and De Kuyper, I would like to congratulate all of our winners and to also express our appreciation to all those who participated as well as their respective bars, restaurants, hotels who encouraged them and gave them the support,” Serieux says.