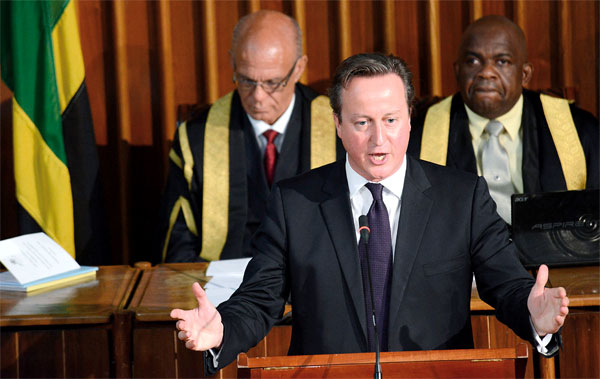 But Can Still Catch The Flight.

CARICOM Reparations Commission (CRC) Chairman Hilary Beckles recently called on British Prime Minister David Cameron to make an ‘Apology for Slavery’ when he visited Jamaica — along with the Royal Princess Anne. Several similar calls were made from across the región, including Saint Lucia.

The calls were made way ahead of Mr Cameron’s arrival in Kingston, including by the Government of Prime Minister Portia Simpson Miller. Similarly, way ahead of boarding his jet in London, Prime Minister Cameron made it clear no such apology would be forthcoming. He didn’t say it himself, but a spokesman at his office indicated this British Prime Minister, like his predecessors, is not about to offer any apology for Britain’s role in slavery and native genocide in the Caribbean, far less Jamaica.

By his account, slavery happened centuries ago and before David Cameron was born; and, like his predecessors, he “does not think financial compensation or reparations is the way to go.” As far as Mr Cameron was concerned, he was visiting Jamaica “to discuss the future” and therefore not the past. So, not a Word shopuld be expected from Mr Cameron by way of an apology for slavery.

The British PM’s refusal to apologize for the sins of his forbears is regrettable. All he was prepared to say was that Britain ‘regrets’ what happened with slavery because, by his account, slavery was ‘legal’ at the time. But nothing he has said either justifies slavery or excuses Britain from its responsibility in the Slave Trade.

Recent revelations show the British Prime Minister — like many others holding high office in the UK society – is among a long list of prominent British politicians and personalities whose bloodlines are linked to slavery. These families benefitted from enormous economic reparations for the loss of their slaves after the Abolition.

One of Prime Minister Cameron’s bloodline ancestors, General Sir James Duff, was s slavemaster in the 1700s — and benefitted greatly from it, having owned slaves in Jamaica. General Sir James — an ancestral blood-relative of Prime Minister David Cameron — was paid the present-day value of three million pounds (Sterling) after he had to give up his 202 slaves in Jamaica when the British Government abolished slavery in 1833.

Other relatives of Prime Minister Cameron, including an Earl of Fyffes, were also compensated even more for losing their slave ‘properties’ after Abolition.

Altogether, the British Treasury had been so fattened by the taxes and other procedes from Slavery that it was able to pay twenty million pounds (Sterling) to slavemasters in Britain and the West Indies for loss of their slave properties. (In today’s value, that can amount to tens of billions of pounds and scores of US dollars.)

Many of the aristocratic families in the UK and Europe today are on the long lists of those who gained and were compensated so greatly for losing their slaves, just as those who were also compensated in Saint Lucia and everywhere else are also documented at home and in the British records.

Against that background, with Britain having played the undoubted leading role in keeping slavery alive and with the entire Caribbean Community (CARICOM) seeking an audience for a decent discussion on Reparations with Europe, an apology by Prime Minister Cameron, in the Caribbean, would have been a good (even perfect) segway into the dialogue being sought by CARICOM on Reparations.

Jamaica’s Reparations Movement is way ahead of all others in the Caribbean by way of research and documentation, revelation and action, towards giving the Reparations movement there the needed parliamentary and legal traction. The Jamaica parliament has already adopted – without opposition — a motion backing the demand for Reparations from Britain. Ahead of the Cameron visit, host Prime Minister Portia Miller was urgently called upon to ask her British counterpart to make that apology for slavery while on Jamaican soil.

But since Jamaica is at a point where it can make that legal case for reparations that all other Caribbean countries will eventually have to, all efforts are being made to break Jamaica’s back and weaken the movement for reparatory justice there as much as possible. The hope is that with Jamaica gone, the Caribbean’s case will have been weakened by the loss of a strong leg.

CARICOM Prime Ministers did not need to publicly express their support for the call by Jamaica for Prime Minister Cameron to make that apology. Prime Minister Miller also spoke for them. Besides, the CARICOM Reparations Commission (CRC) speaks for both CARICOM and the National Reparations Committees (NRCs), which position had already been outlined by Professor Sir Hilary Beckles in Jamaica.

Never mind the British PM’s failure and refusal to apologize, CARICOM cannot but continue to call for an apology by Britain.

CARICOM already has a game plan that can always adapt to changing circumstances. Left to the region’s leaders alone, discussions on Reparations would long have started with Britain and the other European countries that benefitted so greatly and for so long from Slavery and Native Genocide in this part of the world.

CARICOM’s current preferred option is for open and honest dialogue and negotiations, including an apology, instead of direct pursuit of criminal justice at the international level for what is acknowledged, by far, the world over, as the greatest crime against humanity that mankind has ever known.

The ball is therefore in Britain’s court. Prime Minister Cameron can choose to continue to dance around the issue, or heed good advice from his peers across the Atlantic to start a frank, honest, and decent discussion. He can continue to express regret, but that will never be enough as regret doesn’t erase or start to address the legacy of pain left by slavery.

Prime Minister Cameron is not at all ignorant about what slavery has cost us in the Caribbean. All the figures are there to show how many millions (now billions) worth of reparations paid to British slavemasters after abolition. All the evidence is there too, to show that slaves who laboured in blood, sweat and tears awoke just as penniless on Abolition Day as ever — and were never, ever compensated.

Against this background, CARICOM’s overall commitment has to be not to let the reparations issue ever rest. And with both time and history on our side, all Caribbean people must support all the calls on Cameron to do the right thing and apologize for Britain’s role in and benefits from leadership of European implementation of slavery and native genocide in Europe’s West Indies.

The bottom line question we must answer is: If David Cameron’s ancestors qualified to get reparations for loss of their slaves, why shouldn’t the descendants of those same slaves have equal right to reparations as those who benefitted from enslaving them?

The answer isn’t blowing in the wind. The fact is that Britain led the European Slavery movement at its best and now is our time to get Britain and its fellow beneficiaries from slavery to own up, apologize and make amends.