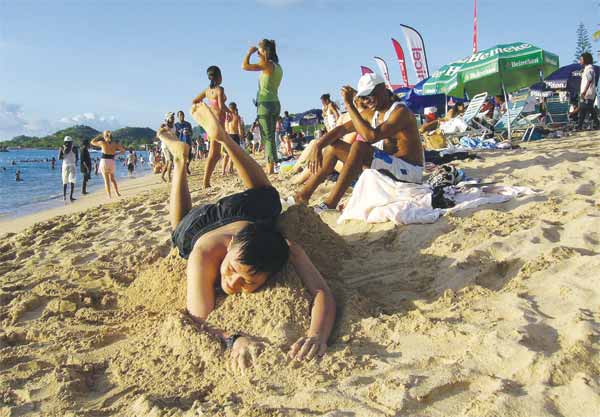 OVER the past couple of weeks, I’ve been enjoying an absolute rarity for media workers…vacation and during that time, I had the extreme pleasure of sharing it with my only two nieces whom I hadn’t seen in nearly a decade.

The two teenagers were even more excited than I was and I was dragged everywhere. But the one place that they loved the most was, yes, you can guess, the beach. After all, if you live in the dark and gloomy ice box a.k.a. the UK, wouldn’t you want to spend every waking minute of your vacation on one of our beautiful, warm beaches?

So I happily obliged and off we went to the beach next to Pigeon Island.

The water was exquisite and my nieces, as well as my children and a few cousins were having the time of their lives.

On the flip side, whilst I was happy, being one of three adults in the bunch and for the longest while, the only adult with the group in the water, I had to be super vigilant and completely aware of my surroundings as well as the group that I was with.

This is when I began to notice some things that really put a damper on my spirits.

Firstly, I had a mini heart attack when something grazed against my leg. Whilst I was thankful that it wasn’t a baby shark, a cheeky fish or whatever else that is bold enough to attack me in the water, I was equally disheartened to see that it was an empty potato chips wrappet.

Shortly thereafter, I noticed my daughter pouring water over her head with a disposable plastic cup that floated right up to her…ewww on so many levels.

There were about three other times when we stumbled upon bottles lying amongst the rocks and another snack wrapper, but what did it for me was the time that I was waddling through the shallow part of the water whilst carrying my two year old son and I tripped and almost fell over, after my foot got caught in a black plastic bag that was filled with God knows what.

Yes people, I fled that part of the waters and took my group with me…I never looked back to see what was in that bag but I shudder to imagine.

As the day went by, I tried to mask my feelings about the state of the water at least for the sake of my oblivious nieces as I didn’t want to ruin their day but that niggling feeling stayed in the back of their minds as every time they ducked or splashed each other, or went for a dive or simply did the famous Bay Watch run, I would subconsciously pull that face you pull when you see someone step in dog’s mess. I just couldn’t help it.

I was also upset that this was the way I felt after visiting the beach for the first time in such a long time…this was one of my favourite pastimes.

I will never understand why people do the things they do. I mean, really? If tomorrow all our beaches were sold to foreign investors and locals were no longer allowed to visit them, I for one would have the loudest opposing voice and do all that I possibly could to fight this decision but it pains me to know that the same nasty, disgusting people who would dump all sorts of rubbish in the waters would open their hypocritical mouths to protest this decision as well.

If you’re not going to protect our beaches by at least having the decency to keep it clean, why don’t you do everyone a favour and keep your nasty selves away? You like polluting water? Dig a hole in your back yard, full it up and dump things there. Toneh!

I can only image what these people’s houses must look like…yeesh.

People, what will it take before we begin to buck up? We really need to grow up and be more responsible and proud St. Lucian citizens. We have something good going for us here…the beaches are our gems, please, Please, PLEASE stop polluting them.

I won’t even go into what you are doing to our breathtakingly magnificent marine life because, and it’s sad to say this, animal welfare here is not a priority…do it for us, our enjoyment, the enjoyment of future generations and also preserve it as one of our island’s money making features.

It really isn’t that hard to do, you know. Please stop using the beaches as yet another dumping ground.