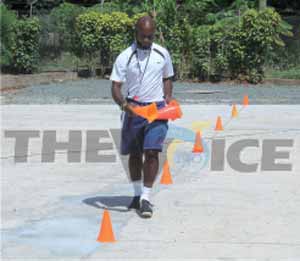 Sponsored
Share this post:
IT’S the third week into the new school year and the word coming out from the Fond Assau Primary School – is that they are gearing for school sports.

The VOICE paid a courtesy call to the Fond Assau Primary School last week Thursday afternoon to ascertain their readiness for what has been dubbed as “A hectic year for sports within the school system in St.Lucia”.

Principal Madonna Florentville and physical education teacher Solomon Alexander share similar sentiments and expectations that the students from their school will perform highly this time around.

Florentville said: Our school has always been known for doing well, particularly in football. So this school year we expect nothing less. We expect them to do very well. Despite the construction of a new wing currently ongoing at the northern end of the school we are still able to use a portion of the court whilst work is ongoing, but with the space available we can manage”

Florentville said: that our physical education teacher Solomon Alexander has been doing a great job with the students in the various sporting disciplines “so we expect them to give of their best. We are not the best in the District considering we are a small school and the reasons for that is that the other schools have many more students so they will start off with an advantage. But despite all of that whenever we go out we give a good showing so we expect our students to consistently do well and to build on where they left off”.

District 1 consists of all the schools within Babonneau and Gros Islet environs.

Florentville continued: “We had one of our students – Joy Edward who recently represented St.Lucia at the CAC Juvenile track and field championships in Trinidad and Tobago and did exceptionally well, so we at the school expect great things, nothing less than greatness”.

As to his plans for the year, Alexander said:

Sponsored | Article continues below
“In the first term, we will participate in football, road racing and table tennis sometime in December. The second term is athletics, while the third term we will concentrate on cricket and volleyball”.

He added: “At present the students are in the process of acquiring the basic skills. It will also allow them to improve where they will be able to perform at the highest level in the various age groups. We have a court at our disposal and it is almost complete. The playing field will be commissioned in a few weeks time so we are excited about that as well”.

Asked whether there was anyone in particular to keep eyes on, Alexander said “Yes!! For certain Joy Edward. She has made us proud over the years, she has competed in Trinidad and Tobago twice and Jamaica once, and likewise in her academics she is a very hard worker. We also have a few more up and coming athletes – Dalian Toussaint (athletics), Bagio Edward (football), and Sheralee James (sprinter – Grade 6).

“In football we have always featured in the top four teams in District 1 for the last 10 years. In track and field we have finished in sixth place because we do not have a playing field and hence the reason why its is difficult for the children to showcase their talent. But we at the school expect that will change pretty soon. All what you see on the day is just simply natural talent”.