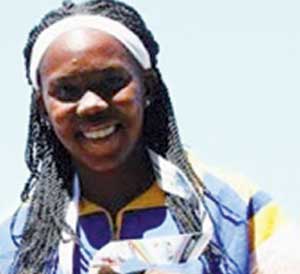 Sponsored
Share this post:
ST. LUCIA picked up a bronze medal at the Commonwealth Youth Games(CYG) in Apia, Samoa 2015 on day 1 yesterday.

Dominica’s ShaneeAngol took second place with a 45.45 metres throw, and England’s Emma Hamplett the gold with a throw of 49.57 metres. .

This was St. Lucia’s second medal ever at CYG, Jeannelle Scheper having won silver in High Jump in 2011, when the Games were stage in Isle of Man.

Sherlan Jules finished 11th overall in the girls 100m dash. She ran 12.94 to finish fourth in Heat 3 in the opening round, the 16th fastest time in the field. She improved to 12.68 in the semifinals, finishing fifth in Heat 1.

Swimmer Jyasi Daniel stopped the clock at 27.40 metres in the boys 50 metres Butterfly. He was sixth in his heat and 20th overall.

In tennis action, Ajani Thomas was knocked out of the boy’s singles by Antigua and Barbuda’s Cordell Williams 6-2, 6-2. Ajani and Jean-Phillipe Murray advanced to the doubles quarterfinals when their opponents retired.