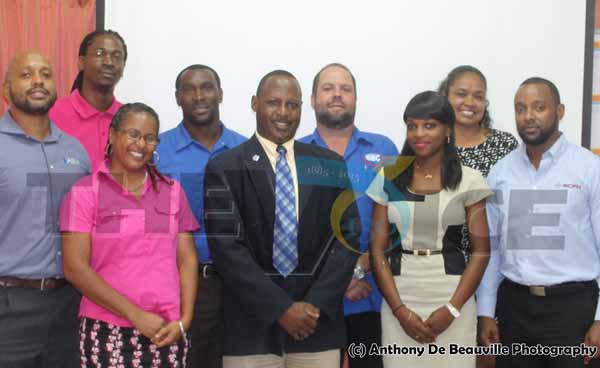 THE 6th edition of the North America, Central America and Caribbean Volleyball Confederation will serve off at Pigeon Island from October 16 to 18 starting from 9.30 a.m. on each day.

The St. Lucia leg was launched on Thursday at the Palm Haven Hotel conference room in Rodney Bay with a number of key sponsors.

He also praised ECFH Group of companies who were the title sponsors in 2012 for remaining a strong supporter of volleyball and this event in particular.

To date RCI, ECFH, Advance Intellectual Methods, Du Boulay’s Bottling Company and Lucozade are all part of the sponsoring line up in terms of sponsors.

Louisy said, “The St.Lucia leg will see teams from Puerto Rico, Canada, Panama, USA, and Central America. A number of players from Caribbean islands will also be here to compete against some of St.Lucia’s best. In addition the tournament is expected to see the 2015 Pan American male champions from Mexico and third place finishers from Cuba as well.”

According to Louisy, every stage of the tournament is important as all teams including St. Lucia, are vying for valuable points and qualification for the International FIVB tournaments and ultimately a birth at the 2016 Summer Olympics in Rio de Janeiro, Brazil.

From all indications Team St.Lucia will be a force to be reckoned with as preparation continues on a daily basis. Louisy said, “The likes of Skye Mondesir and Dala Noel (Youth Olympic Pair), the hard hitting Joseph Clercent, TevinSt.Jean, Anfernee Ferdinand, Augustin Faulkner, Kerin Neptune, Dania Hamilton, Darnell Eudoxie and Sheldon Descartes are all in training to represent St. Lucia”.

The absence of Julian Biscette and Lisa Casimie will be a big loss as the two athletes are currently in Greece and the USA playing and attending college respectively.