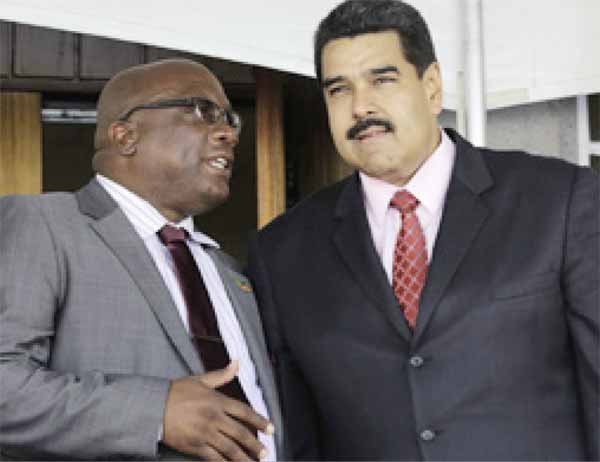 THE president of Venezuela, Nicolas Maduro, visited Dominica on Wednesday and confirmed the support of his country, ALBA and Petrocaribe to the island ravaged by Tropical Storm Erika nearly a month ago.

“I tell our people that Dominica has the support of Venezuela, the peoples of the ALBA and Petrocaribe,” said the president.

He added: “We have come through word and action the most important heritage of our country and Bolivar. We have come with our helping hands and arms to support Dominica in these difficult times.”

The government of Venezuela recently sent a shipment to help the people of Dominica.

Prime Minister Roosevelt Skerritand Maduro, both spoke highly of PetroCaribe and ALBA, stressing their importance to the Caribbean and Latin America.

Skerrit said the initiatives are serving as a lifeblood to countries across the region, while Maduro described PetroCaribe as a regional backbone for economic growth.

He stated that Dominica has seen success due to ALBA and PetroCaribe through reduction in poverty and investments in agriculture, education, housing and others.

Maduro also visited St Kitts and Nevis on Wednesday to promote a memorandum of understanding to continue the agreements that have been supported through the Petrocaribe energy bloc.

In Saint Kitts and Nevis, the Venezuelan Government is developing 64 projects through PDV Caribe, an affilliate of Petroleos de Venezuela, SA (PDVSA), which owns 55% of the shares from five programmes under the Petrocaribe Economic Zone (ZEP).

The Venezuelan Head of State was welcomed by Prime Minister of Saint Kitts and Nevis Timothy Harris, who made reference to Commander Hugo Chavez as a promoter of Petrocaribe and thanked President Maduro for “continuing with the policies promoted by the energy bloc, born in the year 2005”.

Both countries maintain bilateral agreements in education, energy, housing and environment. With regard to energy, they are planning solar panels on the island through PDVSA Industrial, thus promoting the use of renewable energy.