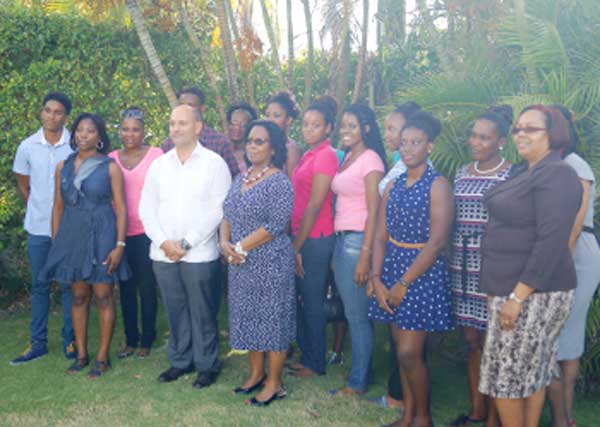 NINE students last week received their credentials and final briefing before leaving for Cuba at the weekend to pursue studies in Medicine.

The Ambassador of the Republic of Cuba, Jorge Soberon Luis, expressed pleasure on behalf of the Government of Cuba, in awarding the scholarships. He noted that there was a significant increase in the number of scholarships awarded this year. He also explained to the students what life in Cuba is like, highlighting places of interest where they may wish to visit during their stay. Particular reference was made to the city of Santiago, which is celebrating 500 years this year. He explained to the students what was expected of them, noting that discipline was a very important factor.

Mrs. Beverly Francis, Head of the Training Division in the Ministry of Education impressed upon the students the need to work hard and shared Mrs. Brathwaite’s remarks that they are ambassadors of Saint Lucia in Cuba.

President of the Humanistic Solidarity Association (Saint Lucia – Cuba), Rawle Harvey, also addressed the students about the living and social conditions in Cuba and asked them to be cooperative, disciplined and show appreciation to the Government and people of Cuba, who were making a significant sacrifice to afford them the opportunity to become professionals.

He also expressed his desire to see the students more involved in their communities and the Association, on their return to Saint Lucia and to the appreciative of the Government and people of Cuba for their generosity.

Dr. Gregor Williams, Chairperson of the Scholarship/Education/Art and Culture Committee of the Association endorsed the sentiments of all the previous speakers.

Two of the scholarship recipients will pursue post-graduate studies; one in internal medicine and the other in paediatrics. Seven students will pursue undergraduate studies in medicine and one in dentistry.
Over the past years, Cuba has been awarding scholarships to Saint Lucians to pursue studies in Medicine, Engineering, Agricultural Science, among other disciplines. Over 550 Saint Lucians have graduated since the inception of the programme.