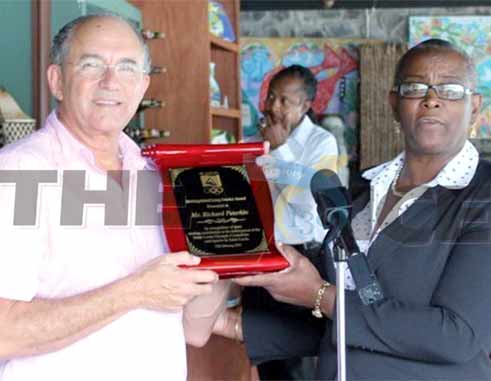 IF my memory and my maths serve me right we are 730 days away for what is supposed to be the opening ceremony of the 6th Commonwealth Youth Games in St. Lucia. True or False?

The last time I checked, the extended dead line was supposed to have been the second week of July 2015. True or False?

In fact the last time I heard something tangible from one of the key stakeholders about the games was after the sod turning ceremony on Tuesday 7 July for the $12 million National Aquatic Centre adjacent to the Beausejour Cricket Ground. In a quick one-on-one interview, I asked the Prime Minister Dr.Kenny Anthony about the status of the games.

The Prime Minister said; “You will recall during my Budget presentation I invited the public of St. Lucia to share their thoughts and opinions on this issue. We will be analyzing those comments; Cabinet is currently deliberating on the issue and the Ministry of Youth Development and Sports has made some suggestions as to a possible approach”.

Dr. Anthony continued, “Right now we are engaged in very intensive discussions to explore answers on that approach. However, I won’t want to compromise it at this stage so I will say that within another two weeks there should be a formal announcement from the government, but don’t hold me to it. Those discussions may be a little prolonged, but that is a plan looking forward to know for sure where we are going”.

The deadline has come and gone not only once, but three times, extensions all along. Are we going to ask for an extension up until July 2017?

As a nation we are left in limbo because those who are supposed to be talking and informing us about where we are at in our preparation leading to the games choose to remain silent and avoiding the media on this all important issue.

In June some 29 delegates from 21 member territories of the Commonwealth Games Federation gathered in St. Lucia for a joint meeting of the Caribbean and Americas region at Coco Palm Hotel in Rodney Bay and high on the agenda was the Commonwealth Youth Games 2017.On one side there was a glimpse of some optimism, and uncertainty on the other as to whether the games will actually take place in St.Lucia.

Speaking to members of the media present the CGF CEO David Grevembergsaid,his visit to St. Lucia has left him more optimistic about the 2017 meet and the CGF was ready to lend assistance to the local authorities. He was looking forward to the island having a great event in 2017”.

Question: has the LOC made any attempts since June to grab at the opportunities / assistance available according to Grevemberg?

Adding insult to injury the President of the SLOC Fortuna Belrose who is also a member of the Commonwealth Games Executive Board representing the Caribbean has said nothing whatsoever for sometime now. She has remained mute on the issue. In fact at present she is on pre retirement leave and so to the chairman of the CGY Local Organizing Committee and former president of the SLOC Richard Peterkin has also been silent so we stand to face an “Embarrassment” if the country cannot pull the games off.

I say “embarrassing” because of the time of bidding, the bidders who were in St. Kitts knew for a fact that St. Lucia was not in a position and would never be anytime soon to host such a venture. At the time they all knew of the country’s financial crunch.

It must be noted that the actual cost of hosting the Games is unclear. The Prime Minister, in his Budget address, spoke to a budget of $34 million. But Dr Anthony went on to say that included in that budget was the $12 million National Aquatic Centre being funded by ROC Taiwan. He also provided an estimate of $8.5 million to fix the George Odlum Stadium, once the St. Jude Hospital was able to vacate that facility and move into its new premises. The Prime Minister also noted that a possible $11.6 million might be available from external sources.

For some people all you are hearing is the legacy that the CYG will be leaving behind. What legacy may I ask? Did World Cup 2007 and the Carifta Games 2009 leave any legacy for us? of course, YES, two dilapidating sports facilities we cannot maintain, one in the north and the other in the south, with the one in the south currently housing the St. Jude’s Hospital, Six years later its an eye sore.

So what are we saying? Coming out and saying “No”, will not kill us, but the longer we take to do so will certainly risk the chance of St.Lucia ever being able to host international events of that nature for some time.