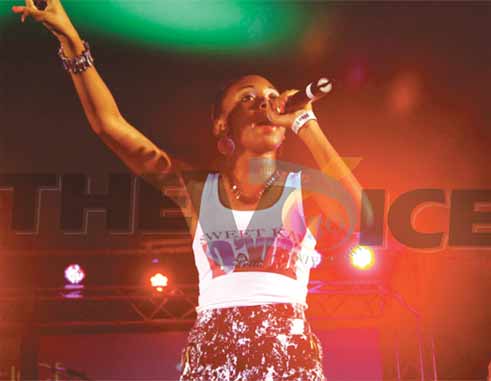 WHENEVER seventeen-year-old Sweet Kay appears onstage to perform, she sings a verse and a chorus and then breaks into introducing herself to crowds that by now cannot seem to get enough of her vibe.

“My name is Sweet Kay and I’m the future of soca music,” she would say with a high degree of certainty during her performances.

Sweet Kay (real name Kisha Joseph) is one of the many young soca aspirants on the block seeking to dominate the local soca music scene. She previously attended Corinth Secondary School from where she graduated this year and the school of thought is that Sweet Kay’s assertions of being the future face of soca is no pie in the sky.

“I developed a passion for soca music when I was two years old,” Sweet Kay tells me. “However, my real musical journey began when I was in Form One when I started singing in house competitions organized by the school. I would often come up with a song and sing it at assembly as well.”

Sweet Kay confessed that she initially suffered from stage fright, which often resulted in her voice cracking. Although she recognized she was talented, she admitted she was not used to performing in front of large crowds. When she entered Form Two at age 14, she decided to face her fears.

By then her stage fright had gone and Sweet Kay entered her first calypso competition, composing her own song. She placed second in the competition. That same year, she competed in the school’s Mathematics Soca Competition and things really began to add up for her.

“I placed first,” she said, smiling. “The instrumental for the song was actually sent to me by (soca star) Fay Ann Lyons of Trinidad and Tobago.”

But it was the release of her 2015 crowd-pleaser, “D Vibe”, which has even seasoned soca artistes admitting that Sweet Kay is destined to do great things. Co-written by Shemmy J and Sweet Kay, the song was produced by Claude Jonas of BCJ Productions and Miguel Joseph of Vibez Productions.

“The song basically explains the way revellers express themselves at carnival, the different dances they portray,” the young soca artiste explained.

The teenage soca sensation has had a busy season this year, performing at various events, including Kaiso Headquarters, Mas Attack Live, Inter-Commercial House Calypso Competition and the Groovy Soca and Party Soca Monarch.

Due to age limitations, she cannot compete on the national circuit until next year. Nevertheless, Sweet Kay hopes to use last season’s experience on the big stage to make her presence felt even better in the future.

“It was a memorable one and I am thankful for it,” Sweet Kay said. “I’ve always seen myself on the big stage. However, when “Fire Waist” came out last year, I didn’t get as many gigs as I did this year. So this year it was a very amazing feeling because the crowds loved the song and the vibe.”

Sweet Kay said the performance that touched her most was the one she gave at this year’s Groovy Soca and Party Soca Monarch where she and Shemmy J did a set. Despite not being able to compete this year, she said it was an amazing feeling to perform there. Plus she got some amazing feedback from the crowd, which contributed to “just a great experience”.

But is she really the future of soca music?

“I’m the future of soca,” Sweet Kay asserted. “I realize there are many veterans in the business. But there are many other artistes who don’t get recognized. So, hopefully by next year, I will be shining even brighter.”

Currently, power soca is mainly her thing, she said, but she’s willing to try groovy soca and calypso as well.

She said her music idol is Destra Garcia of Trinidad and Tobago, whom she got the chance to meet when Destra performed at the opening of this year’s Saint Lucia Jazz & Arts Festival.

When Trinidadian soca star, Benjai, came to Saint Lucia last month to perform at Colour Me Red, he had some encouraging words for the aspiring soca star, when they met up at the Inter-Commercial House Calypso Competition. Benjai, she said, compared her drive and passion to that of his cousin and fellow Trinidadian soca princess, Patrice Roberts.

Sweet Kay is already preparing for competition mode next year. In fact, she held back a song this year and will be writing more music in time for the next season. However, like many artistes are realizing, it’s not wise to pigeonhole one’s talent to a specific season.

“If you want to be in the music industry, you have to show people that you’re not only there for carnival. You have to go all out to make people see that you’re serious about what you do,” Sweet Kay said.

Sweet Kay believes that talent must be harnessed and nurtured. She advises fellow youngsters to go after their dreams despite the put-downs that come along the way.

“At the end of the day, you know what you want to do in life and you know what talent you have. Just keep your head high and stay focused. The sky is the limit,” the young songstress said.