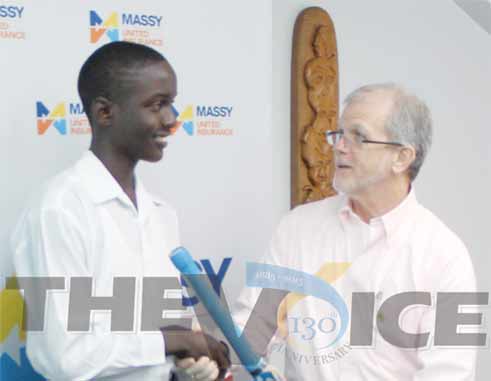 The right hand opening batsman was asked to ‘bat on’ when he was presented with a brand new cricket bat on Wednesday compliments Massy United Insurance Limited sponsors for the Secondary School Under – 19 Cricket tournament.

The quietly spoken Melius was very happy that he was awarded with this special gift following his outstanding performance throughout the Massy United Insurance Under – 19 School Cricket Tournament, the Windward Islands Under – 15 tournament which saw St.Lucia retaining the championship and the recently held WICB Under – 17 tournament where the Windward Island emerged as champions with Melius at the top of the batting averages.

Speaking at the presentation that took place at Massy United Insurance Conference Room, Managing Director Faye Millersaid Massy, “not only helps cricket and the Ministry of Youth Development and Sports, “but we also like to help the individuals in the game, the young up and coming cricketers, people we see potential in and Kimani is no exception”.

She added:“In the past we have assisted a number of cricketers who came to us seeking assistance and they go on to do well. We have done it quietly, but today we decide to brag about it, because Kimani Melius is special. A young man during this year Massy United Insurance tournament went on to score 275 runs, the highest individual score in the school tournament and the highest score by a St. Lucian in any form of the game. This is a great achievement. We at Massy were over the moon when the results came in”.

Miller continued” “At Massy United Insurance we also support golf via the Grow Well programme and Sailing at the St.Lucia Yacht Club. We are doing our bit for the development of sports in St.Lucia. We are doing our bit to help Kimani get better, and the gift is a Spartans Michael Clarke bat so we implore you to continue batting”.

In thanking Massy, Melius said: “I want to thank Massy United Insurance for providing me with a brand new bat to continue with my career, my team mates both at the school and national level for a fantastic effort in this year’s tournament. We had a fairly young side, we competed hard and hence the reason we are champions”.

He continued, “The players supported me really well throughout and made my job easier and that allowed me to concentrate on my own game as well as being a first time captain for my school and the St. Lucia under -15 squad. I thought I was the most senior member of my team and being a captain, I took the challenge upon myself to lead from the front and it actually worked out well for me”.