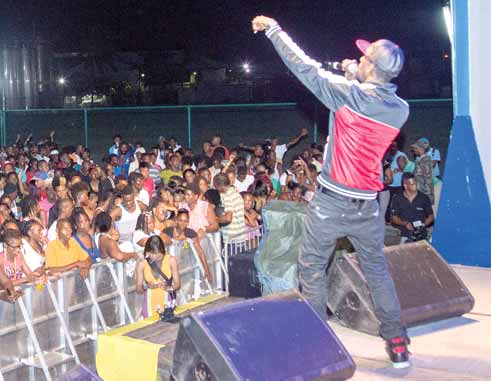 THE sixth of Piton Soca Starz contest came to an exciting finish in front of a massive crowd last Saturday at the Windward and Leeward Brewery Car Park in Vieux Fort.

The competition saw a record number of participants throughout the various stages and has been deemed one of the most successful thus far, with quality songs and performances by upcoming artistes.

At the end of the evening, Brandon Harding, with his songs “Ola” (cover) and “Love We”, his original piece, emerged the winner of Piton Soca Starz 2015. First runner up was Imran Nerdy and second runner-up, Ricardo.

This was the first year that Piton has offered a $10,000 prize to the winner of the competition, more than tripling the amount from previous years.

Immediately after the winner was crowned, Rohan Lovence, Piton Brand Manager, expressed delight with the event. He said : “We have been very dedicated in getting the competition to the level we are at now and we are definitely proud of the quality of the performances and the artistes who have come forward. The excitement generated by this year’s competition is on par with what we witness at the National Soca Competition and we at WLBL are extremely pleased that we could have elevated Piton Soca Starz to that level.”

In keeping with one of its objectives of grooming the participants to master their craft and graduate to the national stage, Piton hosted a number of workshops for the artistes along with multiple rehearsals with the band, EvaLucian. Additionally, performance spots have already been secured for the top three winners at the upcoming “Outrageous Sexy in Black” event during this year’s carnival season.

Piton Soca Starz was launched in April with five preliminary rounds and two semi-finals held in a number of locations throughout the island. Plans have already begun for the staging of next year’s competition when Piton will offer new and exciting elements to maintain the high quality that the brand has become known for.