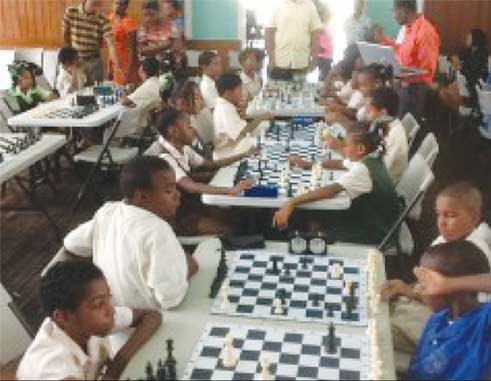 THE Gordon and Walcott Memorial Methodist School just won’t be stopped with a series of wins and activities, leaving other schools in their dust.

Last week, the primary school celebrated its third annual Methodist Talent Vibe or “MTV,” as they call it, where the entire school body, teachers and students alike were given the platform to showcase their multiple and various talents ranging from singing to playing musical instruments.

Principal of the school, Margaret Gabriel told The VOICE that the main purpose of the event is to get the students and teachers to tap into and confidently highlight their creative sides through the arts.

She said: “It was raw talent with children coming up with their own dances, original songs, calypsos, you name it. This is what we had and it was a fantastic show. The children enjoyed themselves as did the audience. We had parents coming in to support, teachers participated and also showcased their talents and it was just a wonderful show.”

Gabriel beamed that some promising talent was seen on the day saying; “We’ve just seen the potential and we can visualise years down the line that developed talent in the various areas. Many are leaving us as they are in grade six but we can just see them flourishing in the secondary schools and we’re looking forward to them doing great things as we have observed over the years.”

A number of past students from the school have gone on to make their stamp in the creative industries including Ricky T, Taj Weekes, J Mouse, OnekaMckoy and two contestants in this year’s Carnival Queen Show, Francillia Austin and Khadija Mason.

Earlier on that week, the school celebrated a major triumph when they won the NCF 8th annual primary schools chess competition. The winner, Noah Harrison is a grade five student.

Adding to their triumphs, the school placed first in their district in the first ever Primary School Website Competition.

The competition ran from May to July 1 and judging took place earlier this month and featured other schools including Carmen Rene and Camille Henry among others.

The site can be accessed at www.methodist.schools.lc