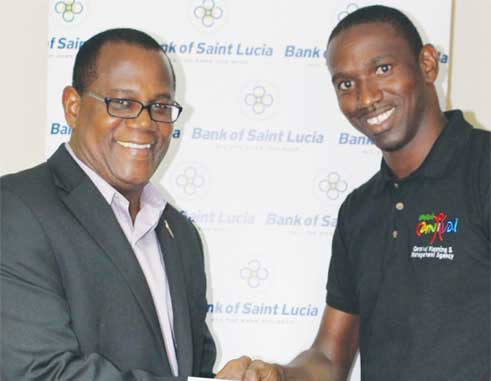 BANK of Saint Lucia (BOSL) has officially signed on the dotted line for another consecutive year in support of St. Lucia Carnival.

BOSL has retained its bronze sponsorship of Panorama, slated for the Beausejour Cricket Grounds on July 17, and the King and Queen of the Bands Competition to be held at the National Cultural Centre Grounds on July 16.

General Manager for Bank of Saint Lucia, HadynGittens said: “The Bank is proud to make a sterling contribution to the arts and culture – having signed on as bronze sponsor of St. Lucia Carnival 2015.

The focus of our support is on two critical aspects of the festival – the creative dimension and youth development, the latter being a key pillar of our corporate social responsibility mandate. St. Lucia Carnival continues to be a major economic driver both at the community and national levels. As a socially responsible institution, we must continue to support activities which develop our communities, safeguard our cultural heritage and contribute to the betterment of all St. Lucians.”

In addition to its bronze sponsorship of the two highly anticipated events, BOSL is also a collateral sponsor of Junior Carnival and Junior Calypso, as well as its continued commitment to RC Jam. Each of the winning young calypsonians received BOSL bank accounts, as part of the institution’s continued efforts to encourage young people to adopt good saving habits early on in life. The Bank says it remains a committed partner in the advancement and preservation of the arts and culture of Saint Lucia.