“NOW therefore you are under a curse. Some of you will always be slaves, wood cutters, and water carriers for the house of my God.” JOSHUA 9.23 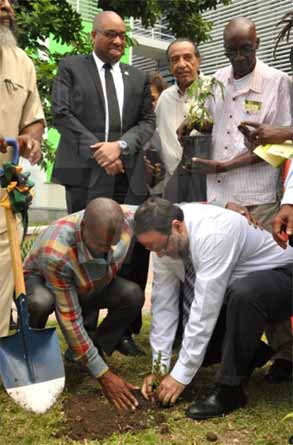 DID Joshua, one of the greatest Old Testament foretellers of the future, and a luminary of legendary leadership, declare the destiny of some persons in the Caribbean?

Almost six months ago, November 10, 2014, with no knowledge of the seismic shift in sinsimilla that was about to take place in Jamaica five months hence, at no less a Mecca of Caribbean and world-class intellectualism than at the University of the West Indies, Vincentian attorney-at-law, Grant Connell suggested in a St.Vincent and the Grenadines newspaper, “If a marijuana tree is planted at the Botanical Gardens and grows, it is not [negatively] affecting anyone. It would be there to educate our people and [would serve]as an added tourist attraction.”

It is most unfortunate that one of our bright young minds, the curator of the oldest botanic gardens in the Western hemisphere, a young man who I think is in possession of intellectual stamina, missed a green gold opportunity – much like many of our present-day cricketers, to take a quantum leap of leadership when presented with a moment in history to assert visionary initiative – when it was suggested to him that a hemp plant be placed for educational purposes – for locals and tourists – at the Botanic Gardens.

Gordon was … well, somewhat shallow in taking that decision and making his retrograde statement, now quickly becoming infamous – giving the recent event at UWI – and is poignantly painful: “As long as Gordon Shallow is the curator of the botanical gardens, the planting of any species of Cannabis …would not become a reality, once it remains an illegal narcotic”. So said he. Isn’t it ironic that this is precisely why the Botanic Garden was established in 1765? Two hundred and fifty years ago a man with considerable power, Governor Robert Melville, and the military surgeon in St. Vincent, George Young, decided to create a botanic garden, “primarily to provide medicinal plants” … and “improve the life and economy of the colony”. In the early 18th century great emphasis had been laid on introducing valuable and commercial plants from the East Indies to Kew Gardens in England to be sent later to the American tropics. The Royal Society fostered the introduction, establishment, and dissemination of highly prized species.

In 1763, Robert Melville, anticipating modern ethnobotany, urged that “physical practitioners of the country, natives of experience, and even old Caribs and slaves who have dealt in cures might be worth taking notice of, and if at any time you should think that a secret may be got at or even an improvement for small expense, I shall readily pay for it.”

Other power brokers such as Caribbean prime ministers, its chiefs of police, Ministers of Tourism, Education and others, are not without culpability in missing the moment and to have supported the Grant Connells and advised the Gordon Shallows in moving the visionary yet practical and common sense idea forward. Still, these powerhouses continue to hide behind each other, CARICOM and the fact that “marijuana is illegal” keeping the misjudged hemp – and our radical development – arrested. These “leaders” seem afraid and unsure of the purpose and reason for their power, unlike Mandela, Malcolm, Martin and other mavericks, to go against the grain in the name of truth and true progress.

In St. Vincent and the Grenadines, Director of Public Prosecutions (DPP) Colin Williams, pilot-like, washed his hands of the placing of the marijuana plant saying: “I am not joining the advocacy for that”. Should the DPP change his stance on the issue – and if he happens to be looking for job opportunities outside SVG, the Jamaica justice system may find useful his unique background as DPP in Vincy – a place that he could still help become hemp heaven as opposed to hemp hell.

Grant Connell, the Vincentian defense attorney who is a daily witness to the utter stupidity of the present anachronous laws in St.Vincent and the Grenadines concerning hemp which is vilified by the dreaded sobriquet, “marijuana”, has been relentless in seeking to cause the powers that be to change the attitude of said power structure. This powerful catalyst for positive social and economic transitioning can indeed transport us to a higher state of being as we inhale the Jamaican, now graduated to and through UWI – sinsimilla of uncommon sense.

Connell is correct in pointing out that most persons in St.Vincent and the Grenadines have never even seen a ganja tree growing and are not aware of its medicinal value or the contribution it could make to the economy. It’s as if we are determined to make our destiny the frightening words of Joshua by choosing to remain ignorant of truth, staying in the dark cave of cannabis-vilifying colonial misinformation, while we watch the heaping evidence of the truth about hemp materialize before our eyes in the US and in Jamaica, as we in St.Vincent and St.Lucia boldly declare: “Yes, I am a proud independent Caribbean man, see how much wood I’m cutting and water I’m carrying for the house of my god, neo-colonialism, how fearlessly I carry out an outdated law, destroying my fellow Caribbean man as he plants a god-given vegetable to feed his family”

Connell brings the naked, sad truth to us. “Most Vincentians are only accustomed seeing these [Hemp] trees when they are strapped to the police vehicles as beasts from a raid or en route to court; but the irony of it is that those who have created the beast in the minds of our people are the same ones who have started to fill their banks, while we continue to scuffle and abuse our people over what can be our new green gold.”

So, I say again, what more perfect way, a practical gift from God, to celebrate the 250th anniversary of the St. Vincent Botanic Gardens by introducing this miracle plant in the very gardens established as a repository for medicinal plants and to improve the life and economy of St. Vincent and the Grenadines. Lo and behold we are greeted with the news that the Minister of Justice – not a convicted “drugsman”, I say again, the Minister of Justice, in Jamaica, planted a marijuana tree, not in Trenchtown or some hidden mountain top in the backlands of Jamaica but at our prestigious University of the West Indies, Jamaica, to lead the way for the Caribbean – and the world.

As Jamaicans of a certain linguistic particularity might say, if they were to address my fellow Vincentian friends, Gordon Shallow et al: “It nat too late to plant de ganja in unnu Botanic Mr. Garden Gordon”. Even President Barack Obama, it seems, is learning to speak the language of Jamaica. “Ah wagwan, Jamaica”? Do we need to ask?