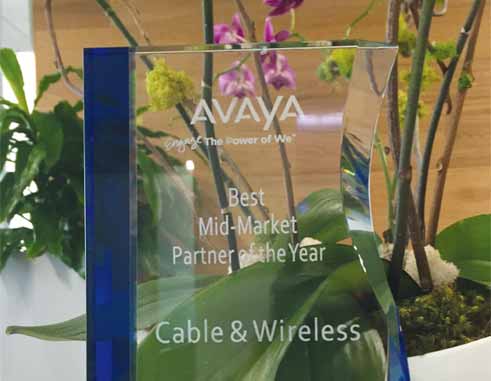 CABLE & Wireless Communications (CWC) has announced it has been recognized as Avaya Central America and the Caribbean Mid-Market Partner of the Year for 2014.

In addition to this win, Cable and Wireless received nominations for Project of the Year, Salesperson of the Year and Pre-Sales Engineer of the year. The company received the award during Avaya’s recent Partner Engage Week Event in Miami, FL.

“We are honoured to receive this award from Avaya which serves as a testament to our team’s hard work and dedication in serving our customers with excellence. The Small and Medium enterprise segment is one of the largest growing in the Caribbean and Latin America and thus a vital piece of our business plans. We look forward to continue working with key partners, such as Avaya, in helping small and medium companies grow in the region, while providing them with the best ICT products and solutions”, said John Maduri, President Cable & Wireless Business.

CWC has been Avaya’s platinum Partner for the past five years, the highest partner status level in Avaya’s Channel Relationship hierarchy. With this award, Avaya recognizes CWC’s commitment to the region shown through increased synergy and collaboration as well as the launching of new initiatives such as myOFFICE, a business solution that helps small and medium companies achieve faster and more efficient communications, improve productivity, and cut costs.
“With the integration of Columbus, Cable & Wireless Communications is positioned to excel as one of the region’s top ICT providers. As Avaya’s first and longest running Platinum Partner in the Caribbean and Central America, we are glad to be one of Cable & Wireless’ partners of choice and continue working together to deliver innovative solutions to companies and governments in the region” said GalibKarim, Managing Director, Avaya LATAM.