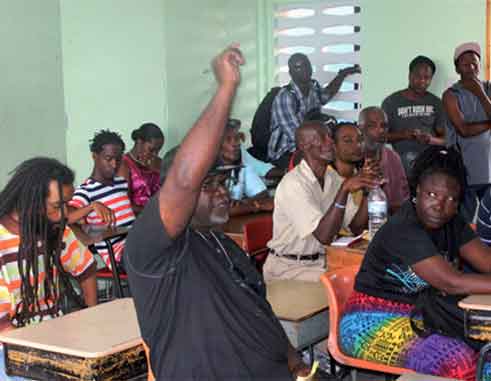 IN just under six weeks, the first calpyso tent show should begin at the National Cultural Centre. The real test for the calypso and soca fraternity, however, is putting together a season for an art form that has undoubtedly seen better years.

During a heated and interactive session hosted by the St. Lucia Association of Registered Tents (START) last Saturday, close to 40 calypsonians and soca artistes were apprised on the developments taking place in the fraternity. Many of those who attended registered their frustrations at meeting to discuss the same issues affecting them for years for which there seems no remedy.

Deputy Chairperson of START, Tony Wilkinson, told The VOICE that the main points the START executive was trying to get across to members to the membership of the SLCA (2009) – which is dormant for now – was what is really happening for this year’s calypso season and to let them know more about the grouping that is responsible for calypso.

“We also gave them the platform to ask questions so that we can give them some form of comfort so that they can be assured that this year’s calypso season will go ahead,” Wilkinson said.

Wilkinson, who is tent leader for South Calypso Tent, said START will be assuming all the responsibilities of the SLCA (2009) for this year. He added that while STAART is not sure as to what will be the case after this year’s season, he thinks it is imperative that a general meeting be held soon so that everybody decides on what they really want.

START is a grouping of tent leaders that was started about eight years ago. While at least two SLCA (2009) members indicated on Saturday that no formal notice of resignation has come from SLCA (2009) Chairman, David Jordan, and other SLCA (2009) executive members said to have resigned from the organization, there seems to be consensus that the SLCA (2009) is non-operational. That’s where START comes in, Wilkinson told The VOICE.

The first tent show is slated for May 30, with shows being hosted every Saturday and Wednesday after that. Wilkinson said the aim this year is to have eight calypso shows, two calypso quarterfinals and two soca shows, all of which will precede the calypso semifinal.

The ticklish subject of subvention also came up at Saturday’s meeting at the R.C. Boys’ Primary School. While there has not been a definitive financial commitment from the Ministry of Finance, Wilkinson said other options remain on the table.

“The situation is still the same as last year where the ministry has said that because of the economic situation they cannot give us a subvention,” Wilkinson explained. “But they’re hoping to give us assistance through other means in terms of support which we are kind of looking at. We feel it’s better than nothing.”

During Saturday’s meeting, The VOICE learned that the twelve shows the tents are expecting to host this calypso season will cost them around $480,000. However, door receipts are expected to total just over $100,000. Wilkinson said that while that imbalance is a crucial factor, tents are nevertheless hoping to make ends meet. Whatever assistance central government does decide to offer – coupled with sponsorship from the private sector – should be able to solve the equation, he said.

There are currently 140 calypsonians registered among the seven calypso and soca tents and rehearsals are scheduled to commence at least two weeks before the first tent show. Wilkinson said he would like to see the level of quality across the board improve this season. Quality, he said, is very important to the overall product that has declined in some areas over the years.

“We would like to attract more crowds. We have realized that the crowds have been decreasing for the two to three years. We’re trying to give the patrons a quality product. We’re having less tent shows compared to the previous years but we’re trying to give them value for money,” Wilkinson explained.

Meanwhile, multiple socamonarch title winner, Wenhal “Alpha” Gerald, says he is willing to extend his stay from the competitive soca arena unless organizers raise the stakes. He told The VOICE last Saturday that while music remains his deepest passion, “it’s always been my concern to see music going where it’s supposed to go.”

Gerald won a combined six groovy soca, party soca and road march titles between 2004 and 2010. He said local shows also need to be packaged and promoted better so as to attract the quantum of fan support calypso and soca music attracted to shows in previous years. Gerald said the time had come for the art form to be treated as a round-the-year business and not a seasonal endeavour.

Just last month, another entity, Artistes Representing Themselves (ART), held its own meeting in an attempt to enhance the working conditions of calypsonians. The main aim of ART is to be a trade union arm that represents the affairs of artistes.