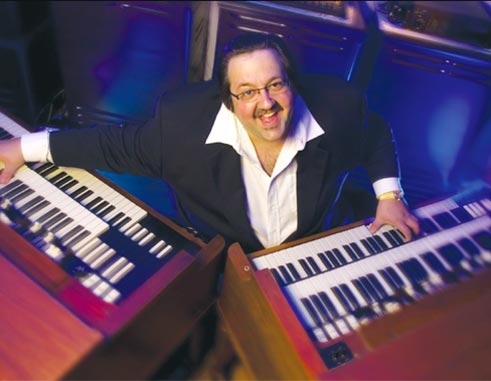 JOEY De Francesco’s emergence in the 1980s marked the onset of a musical renaissance. Organ jazz had been a form of music that went into hibernation from the mid 70’s to mid 80’s largely due to the introduction of high-tech, light-weight keyboards. It was Joey, however who ignited the flame once again with the sound of his vintage Hammond organ and Leslie tone cabinet.

Considered a child prodigy, Joey remembers as far back as age four, playing jazz tunes modelled by his father, Papa John DeFrancesco and memorizing music from the many jazz albums in their home. Legendary players like tenor saxophonist, Hank Mobley, or drummer, Philly Joe Jones, would soon become aware of young Joey DeFrancesco and acknowledge his enthusiasm.

Joey’s grandfather and namesake, Joseph DeFrancesco, was family patriarch and, himself, a musician’s musician; able to pick up a new instrument and teach himself to play. This gift was passed down to young Joey and now manifests itself in Joey’s extraordinary keyboard skills; piano playing; and organ wizardry – not to mention his undeniable mastery of the trumpet. Joey’s desire to play the trumpet began after touring with the great Miles Davis.

Initially, Joey signed an exclusive recording contract with Columbia Records that resulted in a series of well-received albums and CDs that lifted Joey’s reputation and stardom higher and higher. The phenomenon, known as Joey DeFrancesco, soon became a household name in the jazz world as he began to tour internationally with his own quartet and eventually trim his group to a trio that boasted the guitar work of Paul Bollenback and drumming of Byron ‘Wookie’ Landrum. This trio would become the longest running organ trio in modern times.

The list of established musicians who felt inspired to perform with Joey grew. At 22, Joey was called upon by guitarist, John McLaughlin to form the group, ‘Free Spirits’ which included band member Dennis Chambers. Today, Joey has been around the world dozens of times touring and recording with his own trio as well as part of all-star projects, some of which include, Ray Charles, Bette Midler, David Sanborn, Arturo Sandoval, Frank Wess, Benny Golson, George Coleman, James Moody, Steve Gadd, Elvin Jones, Jimmy Cobb, George Benson, and John Scofield , not to mention the myriad of foreign jazz artistes that he’s collaborated.

Joey is a two time Grammy Nominee: In 2004 for his record ‘Falling In Love Again’, and, again, in 2010 for his release ‘Never Can Say Goodbye’. In 2014 he was inducted into the inaugural Hammond Organ Hall of Fame. Quoted as the Master of the Jazz organ, Joey has received countless Jazz Journalist awards, and accolades worldwide. Currently, Joey continues to tour with his own group and perform with all-star projects in major jazz clubs and festivals internationally.

With over 30 recordings as a leader and numerous collaborations with the masters of modern jazz in his legacy, Joey DeFrancesco deservingly takes his place with Fats Waller, Wild Bill Davis and Jimmy Smith in the lineage of Jazz Organ.