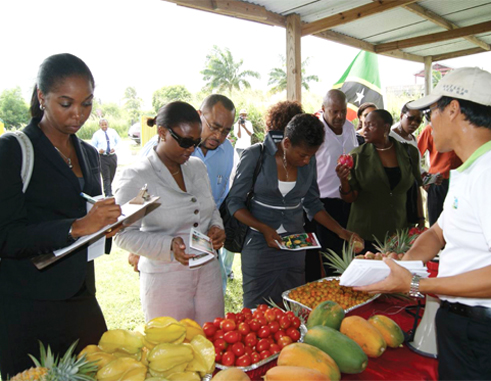 THERE has been a quiet revolution in the island’s agriculture ever since the Republic of China (Taiwan) returned to the island on the invitation of Sir John Compton whose UWP won the 2006 elections. The once flourishing banana industry had been severely challenged under the former government and a dark cloud of despair seemed to mark its final rites. Truth be told, the decline was partly due to WTO rulings on free trade coupled with the farmers’ reluctance to diversify and their damaging ‘no-cut’ strikes. Farmers were then at their wits’ end. Hurricane Tomas came and inflicted more deadly blows; a new banana disease added to their woes.

Thankfully, there were at least three saving graces in the recovery process of agriculture and bananas. Experienced farmers knew that weather systems are cyclical and ‘passing’ events. Then there was the return of John Compton who had resolved to re-establish the Development Bank if returned to office. And thirdly, there was a growing realization amongst the farming community to diversify their on-farm investments. There was a general awareness that commercial banks were set up to lend short-term and recover their loans at high interest rates. A development bank on the other hand targets social and infant industries for long-term lending at lower interests rates.

The Saint Lucia Development Bank had previously been set up (post-independence), under the Compton-UWP regime from three existing financial institutions. It merged the Housing Bank, the Agriculture and Industrial Bank and the Financing wing of the NDC (National Development Corporation). The intention of its creator, Sir John Compton, was to provide loans for the social sector (housing and education) and for the productive sector (agriculture and manufacturing). The contribution of Compton’s Development Bank to the progress of Saint Lucia is too well known to be repeated here.

The bank soon faced difficulties, however. Commercial banks entered the housing loan market and offered students’ loans. Some even offered farmers’ loans for pick-up trucks and small farm machinery. Then as if a planned attacked had been hatched against the Development Bank, concessionary loans began to dry up making less money available for on-lending to students, farmers, home builders and industrialists. In such an atmosphere the new IMF-minded intellectuals who had been imported by new Labour with their book learning decided that, the National Commercial Bank (NCB) and the Development Bank ought to be amalgamated into the Bank of St. Lucia (BOSL). That was in 2000.

In this green figs and salt fish society nothing happens in the public domain without political interference. As if driven by spite the entire board of the Development bank was unceremoniously fired (dismissed, if you prefer) and replaced by the board of the NCB – the new BOSL. Daniel Girard, the head of the Development Bank and a bright rising star in the banking fraternity was literally eclipsed (squeezed) out of office. Others survived seemingly by the skin of their teeth. I mention Girard to make a broader point. During my involvement in party politics (1974 to 2006) I have come across many persons whose politics is difficult to discern. Such persons quietly cast their secret ballots at elections for the candidate who would better represent them, and quietly retreat to their homes.

It is important to note that the Saint Lucia Development Bank provided both the money and the technical support to successful applicants. For example, the loan given to a client for home construction is conditionally offered on the strength of monitoring and supporting the process of construction. The bank knows from experience that even when builders are fair and honest, the unexpected can happen to frustrate the final product and the cost over-runs which can ensue.

Also, the introduction of new technologies in agriculture and the thrust for education and social advancement can best be achieved with the assistance of an indigenous development bank which aims to help pull hard working citizens up by their boots straps. Besides, the savings at the indigenous commercial banks are the savings of the people of Saint Lucia and therefore ought to be used for the development of Saint Lucians and not for foreigners whose only agenda is to milk the island dry and export their profits overseas. This new imperialism must be stopped in its tracks!

On his return to office in 2006, Sir John Compton re-established the Development Bank as a crucial institution that would aid more rapid development of Saint Lucia. Sir John was particularly keen to increase the number of young Saint Lucians who were assisted in financing tertiary (University) education. The key to a country’s economic progress is the education of its people. It would be of immense interest to compare the English-speaking Caribbean in terms of social and economic development over the last forty years; computing decade by decade comparisons, to test Saint Lucia’s progress. It would be of even more interest if some sort of relationship could be drawn between countries based on the number of persons who were afforded university education and training.

In the meantime it is appropriate for Saint Lucians to pause a while and reflect on what they have done with their independence since February 1979. I would wager that the most important pillar of independence has been the establishment of the National Commercial Bank and the Development Bank and the manner in which these two institutions were used by Sir John Compton to enrich and consolidate the progress of Saint Lucia. Compton’s ‘real’ monument therefore stands all around us and not in his stone replica in Constitution Park!