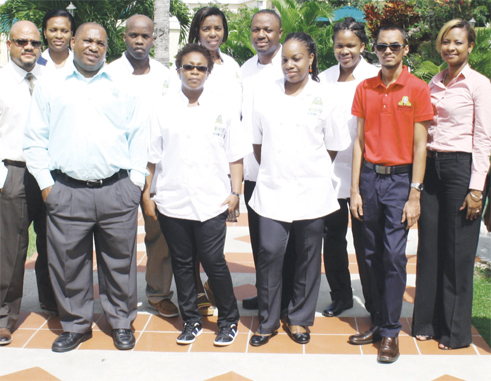 NATIONAL Research Development Foundation (NRDF) a nonprofit organization, along with St Lucia Hotel and Tourism Association (SLHTA) will be hosting its first “Independence Cake Challenge” on February 20th and 21st, as part of Independence 2015 activities.

The event was officially launched Tuesday at the Bay Gardens Hotel in Rodney Bay.

A cadre of six competitors some coming from as far as Vieux Fort and Soufriere have been charged with the task of baking and then decorating an “Independence” themed cake, to serve 100 persons, within six hours.

The baking and decorating challenge will showcase pastry chefs from some of St Lucia’s best hotels and past students of the NRDF’s cake decorating courses, as a start to what is intended to be an annual feature on the Independence calendar.

SLHTA, the title sponsor, no newcomer to such events has been promoting the importance of education and tourism through various public awareness programmes and so it was a piece of cake for them to respond enthusiastically to collaborating with NRDF on this venture.

Prime Minister Dr Kenny D Anthony has put his stamp of approval on the event, as the patron and the winning cake will have the honour of being showcased at the Prime Minister’s Annual Independence Cocktail.

The challengers will be proving their skill and creativity to three judges and an audience comprising cake enthusiasts and other specially invited guests. Mr Ronald Charles, NRDF General Manager, says however, that the event is underpinned by a greater purpose. He said: “The Cake Challenge is more than just a fun competition. It is in fact a far-reaching message couched in sweet artistry, as the NRDF and its partners collaborate on promoting the idea of transforming hobbies into trades, thereby creating sustainable livelihoods, whether cake, leather work, handmade bags and so on.”