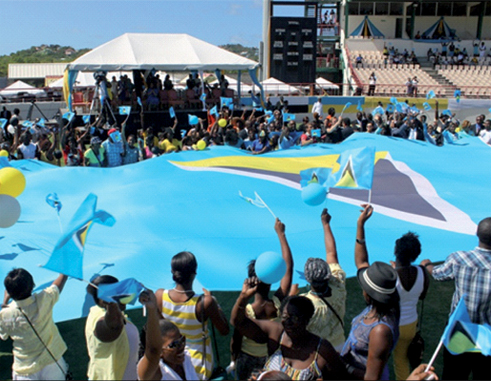 THIS year’s Independence celebrations are expected to take on greater meaning, says a member of the National Independence Coordinating Committee (NICC).

Consultant in the Ministry of Tourism, Heritage and the Creative Industries, Christopher Hunte, told The VOICE this week that plans for this year’s celebrations began in earnest last June with Cabinet Secretary, Darrel Montrope, meeting with the Vieux Fort Town Council and various other interests in the south. He said the early preparations were necessary since organizers were mulling changing the location for the main events.

This year’s celebrations are being held under the theme, “The Journey”, and organizers are seeking to develop the tourism product by showcasing the best the island has to offer in culture, trade and investment possibilities.

Hunte said the decision to host the main activities in Vieux Fort stemmed from a number of key factors, among them the logistics that the southern town possesses that cater to hosting mass events. While criticism has been showered on the NICC’s decision to relocate the main activities from the north of the island, Hunte said space and a change of scenery were overriding factors.

“Vieux Fort allows you the space of the promenade, the playing field and the beach, the back roads, the flat terrain. The police station and the commercial centre are also close by. Everything is fantastically laid out from a capacity standpoint.”

Next weekend is being billed as the period when much of the island’s nationalism will be showcased and Hunte is urging Saint Lucians to come out in large numbers, adding that organizers are “shooting for 20,000 people in the three days”. There will be a little something that caters to everyone’s tastes, he said.

“The bottom-line is that we have a large contingent of events and we make no apologies for wanting to keep people bouncing all around. We want them to go there and stay there. It’s like a weekend in Vegas kind of thing. We want people to go take in the full experience so that by the time they go back home, they’d not just participated in something historic but would have made history,” Hunte said.

According to Hunte, data collected during last year’s Independence celebrations indicates that 400 documented visitors came to Saint Lucia specifically for the celebrations. While organizers not even considered the tourism impact of the activities, he said, there is the need to now develop that niche market, particularly in the Diaspora.

Thus far, an increasing number of people from the north and other parts of the island have begun to show interest in partaking in the island’s 36th year of Independence celebrations, Hunte said, adding that the events are free to patrons and vendors. As was the case for this year’s Assou Square celebrations, an economic impact assessment will be done during Independence activities, he said.

“So it’s not just throwing out money for a drink-up; it’s something that we have to show slate for. “We’re encouraging everybody to go down south,” Hunte said.

Hunte said that all artistes participating in this year celebrations are being urged to stick to local and original content. Artistes are also being encouraged to perform their own material.