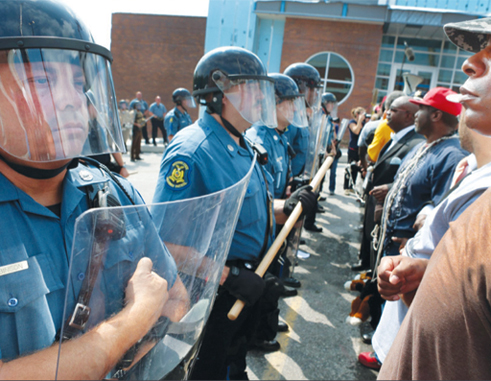 THE Ferguson, Missouri, United States situation of unrest in the wake of the killing of an unarmed youth is a reminder that this is the same nation, which has dissociated itself from the Royal St. Lucia Police Force on the basis of gross human rights violations.

On the global stage for all to see, the people of America are openly decrying police violence and racial profiling. As a matter of fact, the comment that “Ferguson is everywhere” is fast becoming a catch phrase over U.S. media by debaters as they call out other perceived racial injustices, to underscore that the allegedly racially motivated August 2014 fatal shooting of Brown by a police officer is not an isolated incident, but one that almost every state can relate to because they have had incidents which bore similarities to this latest travesty.

In Saint Lucia, the alleged killings by local law enforcement officers were deemed to be of grave concern and deserving of open disdain via a withdrawal of all U.S training opportunities, plus a probe by an independent body, of which a final official report is still pending even as 2014 is drawing to a close.

Whatever the level of moral authority brought to bear on the governments of poor and vulnerable, small island developing states, the U.S. government needs to be mindful that the rest of the world is watching and when injustices appear to be taking place in its very front yard, it is very discouraging considering U.S. fervour for human rights in the Caribbean is very active.

When it comes to U.S. challenges in law enforcement, it all seems to be far more profound and intense because there are ideological and prejudicial ethnic undertones at work in U.S. communities, which are very much in the minimum or totally absent in Caribbean islands, including St. Lucia.

Indeed even the prez is quoted to have said: “This is not a problem just of Ferguson, Missouri. This is a national problem,”

While the Caribbean region has enjoyed the stability anchored by the policies of the pre–dominant world power, in whose backyard we’re located, one cannot but observe that this was a hard line taken to impose the “Leahy Law” which is said to be the legislation that is preventing the island from receiving security-related and material assistance from the U.S.

The Leahy Law is a U.S. human rights law that prohibits assistance to any unit of the security forces of a foreign country, if the Secretary of State has credible information, that such unit has committed a gross violation of human rights.

In over a year the island’s police have missed out on several significant U.S funded/ organized training programmes among them Tradewinds, and other material assistance. Although there was no civil unrest here, the St. Lucia police was hit hard by critics, while their doctrine on the use of force and the relationship with the community was and is still being brought under scrutiny and attack.

For how long will the local police be impeached even as there is public proof that the organization is confronted by challenges of limited resources, prompting therefore, a heavy reliance on foreign assistance?

In Ferguson measures are in the pipeline to assist the police. President Barack Obama on Monday proposed new funding meant to help improve relations between police departments and minority communities, saying there is a “simmering distrust” between the two groups that extends well beyond the unrest in Ferguson, Missouri.

Just as the White House has asked for $263 million in funding for police body cameras and training in the wake of the shooting death of unarmed 18-year-old Michael Brown, Abetta Country is of the view that it is not too late for a more positive, ameliorative approach to be adopted by the United States Secretary of State, towards St. Lucia’s case, in which local police are said to have engaged in targetted killings of persons perceived to be criminals between 2010 and 2011.