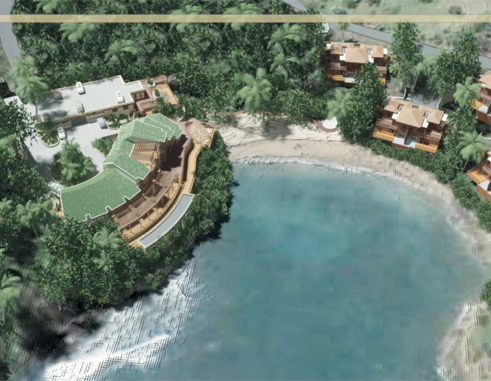 DEAR EDITOR,
THE article of Saturday 29th November entitled “Hands off Trouya” condemning “The Cove” Development is riddled with distortions, speculation and scare-mongery. The frequent referral by Lincoln Weekes to “the Community “ implies that the majority of residents share his views whereas, in reality, the anti-development campaign is led by two vociferous residents intent on what we perceive to be their own agendas .As a representative of the Resident’s Committee. Mr. Weekes undemocratically fails to voice the opinions of those residents who are in favour of the project or who will not sign his misleading petition.

The residents and general public have genuine concerns which we consider only natural prior to any new development, however, to feed them with distortion and launch petitions on that basis can only be considered as deceitful.

Weekes claims that the project “will endanger our community and severely restrict public access”
• In accordance with the laws of St. Lucia, the beach has always been and will remain a PUBLIC beach. There has NEVER been a discussion to the contrary or that the public be excluded. From the project onset the proposed site plans clearly show UNIHIBITED public beach access leading from public parking with public beach facilities adjacent to the hotel. As responsible developers we propose a 1metre wide paved foot path to replace the rough, rocky terrain. This would improve access for beach goers, pushchairs or wheelchairs. The driving of vehicles onto the beach is both illegal and environmentally undesirable and we do not wish to promote this practice, nor facilitate the illicit sand mining that has been taking place. The roads circumventing the development and leading into the peninsular remain unchanged; however, for the comfort of future buyers and the existing residents, we shall repair them to local standards. Where then, is the restriction to public access?

• The majority of the development is composed of semi-detached residential villas and are in keeping with the peninsula covenants. Built on predominantly freehold or already leased property, they will be high standard, eco-sensitive, private homes for those seeking a retirement retreat, an idyllic family home or a vacation home. The buildings adhere to the peninsula covenants which stipulate maximum heights, setbacks from boundaries and public roads and a maximum of two residences per parcel. All adjacent, existing residences and their views were taken into consideration during the design process and a meeting was held with those residents who expressed concerns about their views. Their fears were allayed as our architect showed them the elevations and sections for their existing properties and the proposed villas.

• It is time to stop the hypocrisy. In spite of the covenant restrictions, touristic and long term rentals at Trouya Point are in clear evidence on the internet and via various local and international property agencies. Approximately fifty per cent of the residences are advertised and two properties are operated as multiple family homes or apartments.

“The Cove” private owners will have control over their homes and should they choose to rent them or maintain them during any absences, we would ideally like that to be done through JLDP associated agencies. Their choice to do so is neither compulsory nor written into the agreements for sale.

• The 14-room boutique hotel and spa would be located on a proposed site which currently has a residence of two floors overlooking the beach. It will be marketed as a Retreat/Small Conference vacation, operated to provide a tailored guest experience and will be liaised with other JLDP properties in Martinique and in the future, Tobago. The aim is to offer guests the experience of three different islands and maintain the same quality of accommodation and service. Regional studies have proven that smaller, boutique hotels of a high standard are successful in economic climates like ours. There is no comparison to the larger hotels which are in operation or have failed to be completed. One cannot tar all hotels and developers with the same brush!

In our letter to the residents we stated that they (both existing and future residents) would have preferential rates for the services offered by the hotel (restaurant, bar, spa etc) as an indication that they and the visiting public will be welcomed at the facility. At the residents’ meeting Mr. Weekes proudly sported his privileged resident’s access card to the nearby Windjammer Landing and indicated that these had been offered to the Trouya Point’s residents.

• The Cove is intended to be the first ecologically sound development in St. Lucia with two on-site, EU standards, micro treatment plants for sewage and water treatment. Anything emitted into the bay will be the equivalent of drinking water; however, this can be further used for irrigation. Currently surface domestic run off from several houses and slow seepage from soakaways seeps directly into the bay.

We have offered to link these to our treatment plant. JLDP has also offered to place underground the utility poles and cables that mar the views along the road around the cove.

• Had your readers visited the beach prior to the launch of the petition, they would have found glass and plastic litter, fallen trees (hastened by cook-out fires at live tree bases) and evidence of sand mining. Only since the onset of the anti-development campaign have certain members of the community chosen to participate in cleaning the beach.

The concerns about construction are understandable. The development is estimated to be completed following a two-year period of construction during which time all efforts would be made to minimise inconvenience to the public and residents. It is said that one cannot make omelettes without breaking eggs. Workers are required to construct and with that comes much needed employment to an ailing construction industry.

Responsible development can be advantageous to our island as it is possible to grow beautifully. There are many St. Lucians living overseas who wish to return or retire to ready built homes of a high standard that are not just for expatriates. This eco-responsible, quality construction is also an opportunity for our local contractors to expand their knowledge and our artisans to apply their skills.

Is it just the “Privileged Few” of whom Messrs. Weekes and Dillon are part, who are entitled to “…enjoy what’s left of their country”? It is obvious that a public park in front of their houses and maintained by St. Lucian taxpayers would greatly enhance the enjoyment of their properties. Fortunately, that will not be necessary because we intend to restore Trouya beach to its condition before sand mining, littering and environmental degradation were allowed to bring it to its present sad state.

And, it will be available for EVERYONE to enjoy!

The Residents’ Committee was initially formed to address repairs to the poor roads across the peninsula. It was suggested by two residents that it be expanded to create an Oversight Committee to monitor our commitment to the pledges outlined in the letter if approval is granted. We have confirmed our willingness to liaise with them to allay their concerns, improve their environment to achieve a mutually satisfactory result.

The degree of cynicism which exists is understandable because all too often developers fail to honour their commitments. We hope that with time that we can prove the scaremongers wrong!