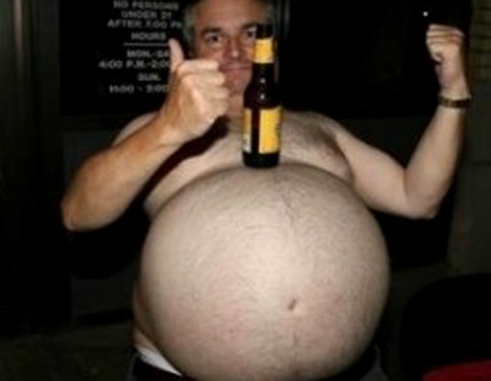 Maybe I’m that wet blanket who likes to rain on one’s parade in this instance but I can’t help but feel disgusted and highly offended when I see this.

A few days ago as I walked through Castries Central, I noticed an older Caucasian couple walking around hand in hand and whilst the female was dressed appropriately for the sweltering heat, I couldn’t say the same for her partner.

He had a gut that would enter any room five minutes before the rest of his body and he was red like a freshly cooked lobster. How did I see all these details? Only because all he was wearing was a pair of shorts and flip flops.

My reflex reaction was a turned up nose and a taste of the small amount of breakfast that I slightly regurgitated in my mouth after seeing such an unsightly mess.

I immediately tried to imagine what would happen to my own father (whom I love dearly) with his 15 months pregnant looking belly himself if he went to the US, UK, Canada or any other developed country on one of their ridiculously hot days and tried to walk around like this tourist did. Surely he would receive some nasty looks, have nasty comments thrown at him, be considered insane and or even accosted by lawmen.

So my question is why, oh why, do these people feel so free to do things here that they wouldn’t dream of doing in their own country?

To be honest, it TICKS ME OFF!

Whilst I know that St. Lucia is a holiday destination, that doesn’t mean that we don’t have laws, regulations and general civilization where businesses are run and respectable people traverse the streets on a day to day basis.

Now this is where I know this cheese will stand alone but in my opinion, I already think that it is bad enough that this gem of an island is prostituting itself to visitors who seemingly have free reign to do as they please, however they please, whenever and where ever they please but this, this is just blatantly running that fact in our faces and it’s as if to taunt us locals and say; “Do something about it!”

I remember when I moved over to the UK at the age of 13. On my first day of school, I was poked and prodded by the British children like a neon green lab rat as they had seemingly never met an “islander”. They wanted to hear me talk and wanted to see me dance and asked all sorts of questions which I absolutely hated but out of all the questions and requests, the two questions which stood out were: “Do you lot have electricity where you come from?” and “Do you lot live in houses or mud huts?”

Let me just take one moment to not only let these questions sink in but I just need to breathe for a second since this is still a sore spot in my life’s history.

Anyway, I don’t just assume that many visitors are ignorant about our way of life here. I know it for a fact…the youngsters at my school and ignorant visitors like the potbellied lobster that I spoke about earlier are proof.

Isn’t there a custom to inform visitors from the cruise ships and hotel resorts of the dos and such don’ts?

Why aren’t these people stopped like us locals would be if we did this nonsense in their countries?

Are we so desperate to pull in the foreign dollars and pounds that we are willing to allow our image to remain as the constant beach party and the place where there is no functioning civilisation?

There is a time and place for everything and quite frankly, if one chooses to walk around stark naked on the deck of their cruise ship or at the resorts where they are staying then knock yourselves out and good luck to you. The beaches are also there for one to wander around wearing barely anything but for goodness sake, something like a bell or lightbulb should go off in one’s head to tell them that it is not okay to walk around the island’s capital or in public like you either just rolled out of bed or you just jumped out of the sea.

I know there are stores which have made it clear that they will not serve customers who are dressed in such manner and I applaud them. I am also aware that there is legislation forbidding this behaviour but is it enforced, not properly at all and it is because of this that these people will continue to treat our island like their backyards and do whatever they want, and because we want their money oh so bad, we say absolutely nothing about it.