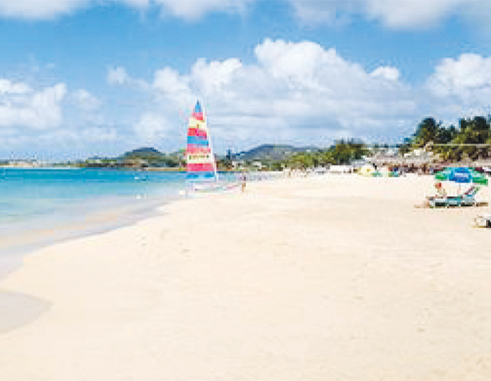 “A simple life is good with me,” exhorted Yanni, a Greek composer and music producer. “I don’t need a whole lot. For me, a T-shirt, a pair of shorts, barefoot on a beach and I’m happy.”

Most if not all St. Lucians will find merit in the aforesaid sentiments, if only because the ocean front offers them a vacation from everyday life and provides a psychological fortress against the vicissitudes of politics and urbanization. Indeed, for most of us, beach visitation has become a way of life since childhood, at anchor through our social experiences and recreational customs. Moreover, a public beach can be a sanctuary for the family and community during hot summer months, and provide harborage from the hustle and bustle of the work day. Yet, if beaches are so central to the people’s identity and inner spirituality, and access to the sand is guaranteed in our constitution, why is it that many hotel developers (some with felonious intent) are laying out unwelcome mats to local beach goers and ostensibly employing all sorts of tactics to make our people feel like trespassers?

Just a few days before Christmas, I found myself a victim of one of the most egregious examples of the privatization (whether lawful or otherwise) of public space in this country. In the true spirit of the holidays, I decided to visit my ancestral hometown Soufriere, a place redolent of age and romance, to take in some of the beautiful scenery and enjoy the charcoal-grey expanse of sand and pebbles along the town’s shores. Upbeat and full of festive energy, I took a water taxi and first ventured out to AnseChastanet and then to Jalousie Bay, a sacred place right between the nation’s battered breasts. As I approached Jalousie Bay, I became prostrated with grief as I realised that all beach access points had been blocked and the hotel had extended its reach and occupied a remote beach corner; the only remaining vestige of public recreational space and comfort.

Not wanting to stir a hornet’s nest, we turned back and sought recreation elsewhere. All the while, with my tail between my legs, I was thinking, “stolen heritage” and “birthright violation”; all in the name of touristic development. Please understand dear reader that this isn’t any abstract economic or social issue to me. This is deeply personal and I am still licking wounds from cultural humiliation and defeatism, and I’m furious. Alas, I can imagine the hundreds of St. Lucians who are afflicted and affected by this social injustice on a daily basis.

So I ask my fellow compatriots: Why do we tolerate hotel developers who erode the character of our public beaches and deny us the right to access those beaches? This is a clarion call beseeching all St. Lucians to demonstrate importunateness and rise to protect their rights to beach access through protest, civil litigation and legislation. Today it’s Jalousie Beach and Pigeon Point, tomorrow it might just be the AnseChastanet and Malgretoute beaches in Soufriere; and there are ominous signs to indicate that they may soon be inaccessible to the public as well.

Let’s take a leaf out of the book of Californian beachgoers who have resisted all efforts by multi-millionaires and property developers to block access to public beaches. Each of us has a responsibility and obligation to preserve and protect our scarce natural resources and pay homage to our heritage. There are simply no socio-economic arguments to justify the expropriation of our natural resources and the vandalism of our cultural patrimony and heritage. One vestige of human uniqueness still often cited by anthropologists is culture. Culture is central to the way we view, experience, and engage with all aspects of our lives and physical resources. The biggest determinant in our lives is culture; where we are born and what the environment looks like. But it appears like we are allowing our cultural underpinnings to sink deeper into naval-gazing irrelevance.

In St. Lucia, beach visitation has been a customary practice and has been part of our traditional and historical way of life. Not only is it a lifestyle for many, it’s also a means of livelihood for hundreds of hardworking St. Lucians. Hotel construction and tourism development must never interfere with the customs, practices and modus vivendi of a people. We need to balance tourism development with cultural protection.

The Surfrider Foundation, an international non-profit environmental organization dedicated to the protection and enhancement of the world’s waves and beaches through conservation and activism espouses the following beach access policy: “The public should be afforded full and fair access to beaches, which are public trust resources, by minimizing the possibility of impediment; including development, subdivision or land use zoning change, or deterring obstacles, including gates, fences, hired security, misleading signage, rock walls, shrubbery or other blockades, being placed upon public rights of way to beach access.”

Against a backdrop of deep distrust and cynicism in affairs of hotel development, I do have a lot of sympathy for the residents of Trouya who are raising objection to a proposal to change the land use of properties in their community from single family residential to multi-family villas and a hotel with spa and restaurant. Judging from the way things have turned out in at the past in Fair Helen, who is to say that agreements won’t be violated and beach access blocked. St. Lucians should be on their guard since it appears that hotel developers systematically trespass on our kindness and hospitality; give them an inch it appears and they’ll take the whole backyard.

Critically, the issue of beachfront development is one that must be looked into expeditiously otherwise we will gradually lose ownership of and access to our beaches. Why are hotels constructed so close to the beach front? Shouldn’t construction plans have considered public access paths and pedestrian zones? It doesn’t seem like hotel developers give a damn about the cultural sensibilities and the needs of local beach goers when they sit to devise their grand plans. Then again, how are hoteliers and developers expected to account for their actions when in the past very few “real” objections have been raised in public. St. Lucians should have protested vehemently against the pillars erected at Pigeon Point until the issue was addressed satisfactoriy.

At any rate, I was delighted recently to have read a trenchant piece written by Earl Huntley entitled “Saving our beaches – Not too late for the Caribbean”. I would love to see that article republished and featured in all newpapers in the country. Writing with a ponderous gravity, Mr Huntley opined:

“If other Caribbean governments want to think that it is too late to save our beaches, then we in St. Lucia must differ. I am of the view that there should be legislation debarring further hotel development directly next to our beaches. Copacabana shows that its is possible to have a thriving tourism industry with hotels that are not sitting almost on a beach, that are adjacent but sufficiently away from it to allow the beach to remain the accessible patrimony of the people. It is not too late to save our Caribbean beaches from the lure of the tourist dollar at any cost. I am telling this story now to show my total support for the residents of Trouya, Bois d’Orange, Gros Islet who are trying to save the small and quietly beautiful Trouya Beach from a tourism development project that will change it forever and at best condemn us to using a track to get there and at worst, debar us from it all together.”

Mindful of the fact that preserving public access to beaches is a constant struggle that requires continued defence and maintenance, Mr Huntley quipped: “I support them whole heartedly and I am prepared to march, demonstrate and picket with them if necessary, not simply because as a former resident of Bois d’ Orange my family and I used that beach and still do, but because there is something more valuable to us than acquiring the tourist dollar- it is to preserve our patrimony, our heritage- the gifts of nature that the Almighty bestowed upon us for our pleasure and recreation and for reminding us that he exists and is the creator. Yes we can make use of them for our economic development but not to the point of selling them to foreigners, so much so that we can no longer have access to them and our descendants know that they are there but cannot even see them.”

I salute the honourable gentleman in stating his case so vociferously and incisively. I agree with everything he said and consider his contribution to be a veritable reference in the crucial debate on beach access. I still believe that we can undo the damage already done and return St. Lucia’s beautiful beaches to its people. I am growing tired of witnessing security guards shooing away St. Lucians. Tourism cannot be allowed to be such a menace to cultural heritage.

Meanwhile, St. Lucians must show more respect and appreciation for the environment by declaring an all-out war on littering, illegal dumping and sand mining. More public education programmes are required to help curb visitor harassment. While we are a little late in coming to grips with such critical national issues – thank heavens we are not too late.