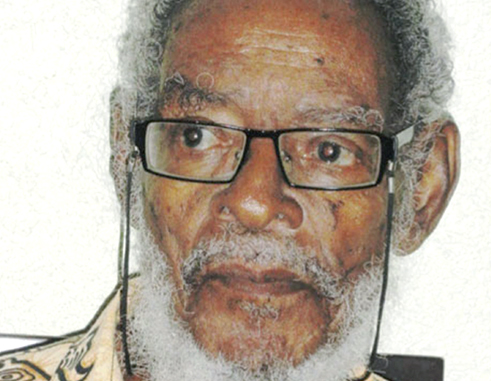 It’s taken me quite some time to settle down and write about Hunter J. Francois. I’d already said all I wanted to while he was still alive. I’d heard too what others said after he died. But it was hard choosing what to share from all I remember about growing up with his family.

The Francois home at Morne du Don was my ‘home away from home’. I spent long hours there every day with his sons and daughters. ‘H.J.’ (as we referred to him), had already gone into semi-hibernation at Trouya Beach and in his absence we enjoyed the total freedom to be ourselves, to grow with the time and be a full part of the societal transition happening around us.

We were of the Black Power, Soul and hippie generation of the late 60s and early 70s, when students of our ilk straddled between the music that came with the Woodstock, Reggae Sun Splash and Peace and Love era and the radicalism of the Black Liberation struggle being pursued in America and Africa. Rastafarianism and marijuana had also just started being exported – in a big way — from Jamaica to the Caribbean and the rest of the world through Bob Marley and inter-island cargo ships.

We wore Afro hairstyles and bell bottom pants, read Eldridge Cleaner’s ‘Soul on Ice’, supported African Liberation and opposed the Vietnam War. We listened to music all day, floating on Cloud Nine most of the time, in that other world that really haunted Hunter.

Our generation straddled between the ‘Peace and Love’ music we loved and the radical and revolutionary political and social expressions of the time.

Radical students among us truly wished we could talk to ‘Mr Francois’, but we were too afraid to even think of it. Conscious that he never approve our ways of living, we all feared being visited by an unimaginable wrath.

To us, Hunter was ‘The Haunting’.

You never knew when he’d turn up at Morne du Don, except the very first day of every year — the one visit that every one of us dearly looked forward to. A musician extraordinaire, when his vehicle pulled up in the garage on New Year’s Day, it was to gather the family band around the grand piano in the wide living room for the annual home concert.

Permanent household guests (like me) would take our rightful place in a safe hearing distance (preferably out of sight) while his wife Olive and their sons and daughters surrounded Hunter the grand piano, to belt out everything from classics to jazz, with Hunter at the keyboard, Luther and Mervyn on bass and guitar, Rickey on drums, Jean and Solange, Deanna and Andreuille lending their voices – and Rossini preferably holed-up painting elsewhere in the house while the few fortunate annual spectators marvelled about the latent talent which abound under that one roof.

That house on the hill — our ‘House of the Rising Sun’ — became the basic home studio where virtually all Saint Lucia’s best musicians of the day (and today) would have honed their horns and sharpened their skills. (It wasn’t for nothing that Luther Francois’ first jazz album was entitled ‘Morne du Don’.)

The Hunter Francois we knew was feared by most, but he was simple and learned — and much revered. Where Trinidadians referred to Eric Williams as “The second most educated man in the world”, the Saint Lucian literati of his time heralded Hunter Francois as “The brightest politician St. Lucia ever produced.”

He earned the wrath of the Catholic church when, as a Minister of Education ahead of his time, the still-colonial state assumed its rightful role to decide what Saint Lucian students learned. The Catholic Church never forgave him for introducing the Education Act, which brought the church’s ‘College’ and ‘Convent’ under state diktate. But Hunter the Minister never backed down.

Pivot of sartorial elegance that he was, Hunter was also an impeccable human. He was truly an enigma. You had to admire him, yet fear his tongue. That was the Hunter we knew on the hill. But the Hunter I got to know after the passage of time was totally someone else.

After returning home from roaming and working in the region and the world, he’d sometimes call me by phone to correct something I might have misstated or misunderstood, said or written, on the air (radio) or in the newspaper. He never recommended I read anything he wrote, but his mere quotes led me to discover he’d said and written more than most today would ever know, including his early treatise calling for “a No-party state”. He also delivered an interesting feature address as Parliamentary Commissioner at the ceremony unveiling the busts of Simon Bolivar and Jean Baptiste Bideau in 1983, which was also published in a special booklet by the Voice.

A man of words, Hunter Francois could be as polished as he could be rough-on-the-cuff. Where Winston Churchill referred to a fellow teller of untruths as a purveyor of “terminological inexactitude”, Hunter called his leader “a pathological liar”.

After breaking ranks with the United Workers party (UWP), he never fully embraced any other, opting to maintain his independent thinking and preserve his unitary approach to life and politics. He lived to end the way he started, shunning limelight in retirement, opting instead to share accumulated knowledge with whoever would listen.

By opting for a cremation, I suspect he was simply saying he didn’t want the elaborate pomp of funeral ceremonies reserved for the likes of him. But the departed having no way of determining subsequent earthly disposal, Hunter J. Francois was accorded the fitting tributes and send-offs he got as a faithful servant of the people, all his life long.

He will certainly rest in eternal peace.